[Charts] New Highs, Hedgies, and the Return of Clean Tech

That means it’s time to abandon our usual long-winded analysis in favor of some pretty pictures.

All it takes is a quick glance, and you’ll be better informed — and better positioned to profit.

Whenever the markets keep hitting new highs, the doom-and-gloomers come out with renewed vigor. “A Depression-era crash is imminent,” they say.

Although the Nasdaq has already registered its 28th record high this year — and is on pace to hit 43 record highs for the full year — we’re nowhere near the peak.

Per Bespoke Investment Group, “Dating back to 1971, there have actually been nine other years where the Nasdaq finished the year with 43 or more record closing highs.” 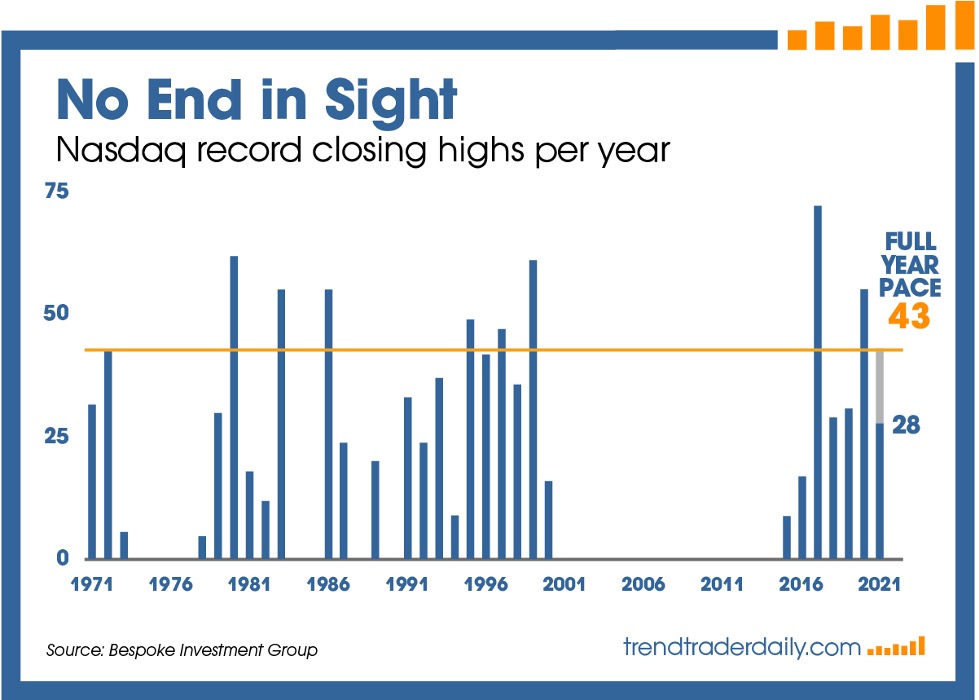 In other words, this bull market still has plenty of room to run.

Now, if we could just make the doom-and-gloomers run, too — as in, run away — life would be much more peaceful.

After a decade-long decline, the $4 trillion hedge fund industry is booming again.

As you can see below, a record 1,144 hedge funds have stopped accepting new money. 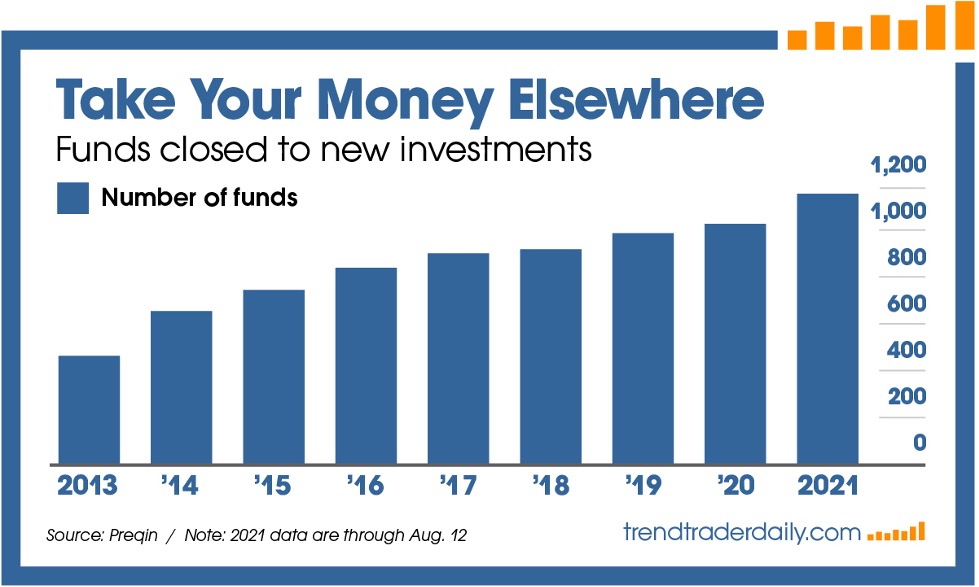 Why the ban on new cash, you ask? Because they don’t need any more!

The average hedge fund returned 11.8% last year, the best return in more than a decade. And this year is on pace to be even better, with the average return at mid-year checking-in at 10.1%.

While the hedgies might be closed for new investment, the stock market certainly isn’t. So look for the excess demand to find its way into individual stocks, which is yet another bullish sign for the markets.

Call it a Comeback

Turn the clock back to 2006 and “cleantech” investing was all the rage.

Case in point: Venture capitalists plowed $25 billion into the industry.

The only problem? The Earth didn’t get cleaned up — and venture capitalists got cleaned out, as their investments plummeted by more than 50% by 2011.

Losses be damned, though.

And this year, according to The Economist, funding could top $60 billion!

With so much capital flooding into the sector, you better believe it’s prime-time to find investments poised to profit from the renewed boom.

Both companies' clean technologies have been in development for the better part of a decade, but now they’re finally being commercialized and deployed.

But you can bet that I’m on the hunt for opportunities that are more imminent. To learn more about these new opportunities, just stay tuned.