No nonsense. No fluff. Just vital intelligence to connect the dots on the market’s next major tech trends and top investments, based on patent filing activity.

For nearly 40 years Michael Robinson has been a Silicon Valley insider and investigative journalist. He holds an honors economics degree from the University of Missouri at Columbia.

He's served on the advisory board of a venture capital firm and as an adviser to 12 high-tech startups in Silicon Valley.

He’s worked with, or consulted for, Boeing, Chrysler, FedEx, McAfee, and more.

His work has appeared in the Wall Street Journal and the New York Times.

At The Detroit News he covered the auto industry firsthand, toured Europe and investigated nuclear power in the U.S.

As a reporter for The Oakland Tribune he won an award for an investigative report on the crumbling state of California's economy.

While at the San Francisco Examiner he was nominated for a Pulitzer Prize.

At the American Banker newspaper, he covered Bank of America's brush with bankruptcy and the Latin debt crisis. 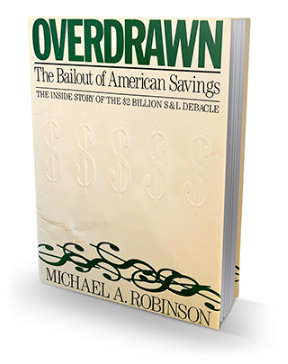 Michael is also the author of a critically acclaimed account of the U.S. savings & loan crisis called Overdrawn: The Bailout of American Savings.

As an independent financial researcher, Michael has a record of making big calls for his readers.

For example, he first recommended Bitcoin in the summer of 2013 — after meeting with several industry insiders like the Winklevoss twins and Brian Armstrong, cofounder and CEO of Coinbase. At the time, Bitcoin was trading at $300. Eventually the price of bitcoin would crest above $60,000. That 19,998% call was enough to turn a small $500 into almost $100,000.

In the late summer of 2016, he put out a special investment briefing on the digital payment revolution — telling his readers two years later to cash out of the final part of their position for gains of 400%.

In 2018 he showed readers how to quickly double their money with a biotech company that helps transplant patients live longer lives.

In June 2020, he recommended a pioneer in oral vaccines that was flying under Wall Street’s radar screen. Investors who acted on his advice had the chance to pocket gains of 375% in just under two months.

In 2021 he recommended closing 25 positions for an average gain of 34% — nearly double the performance of the Dow Jones Industrial Average.

The list goes on and on and on. In fact, Michael has racked up a steady series of double and triple digit winners — 66 in all over the last several years. These include:

How to Profit From the Space Race 2.0

Think we're not already in the middle of the "Space Race 2.0"? You're dreaming... And here's some data that'll wake you up: Five years ago, there were fewer than 90 launches into outer space around the world. That's between governments and businesses. But last year, according to astrophysicist Jonathan McDowell,… read more »

Double Your Money in Three Years? This Blockbuster Drug Could Make It Possible

By any measure, the drug Epidiolex is a massive hit. To start, it's been a financial success. In fact, it has the potential to become the next "blockbuster drug" – those with annual sales of at least $1 billion. But it's also been a godsend for those suffering from epilepsy.… read more »

Did You Take My Advice and Collect These 74% Annualized Gains?

I'm pleased to report that some of my readers (hopefully you're among them) are sitting on double-digit gains in less than three months. Let me explain... Back on November 22, I told you about a company that was a great play in the booming market for outer space, a market… read more »

Electrify Your Home – And Your Portfolio

If there was ever evidence of the need to have a generator on standby, look no further than the Christmas storms that blanketed much of the nation. The combination of high winds, snow, and ice caused the cancellation of thousands of flights. But at least those folks (while frustrated and… read more »

Forget EVs – This is the Future of Autos

If auto manufacturer Porsche has its way, we'll soon be cruising around in cars powered by (drumroll, please)... Air! OK, technically, that's not quite accurate. But it's close. You see, Porsche recently tested a new synthetic fuel it says can compete with electric vehicles ("EVs"). To pull it off, the… read more »