For about a month, I’ve been saying we need a steep short-term “flush” for the S&P 500 Index before we can reasonably expect a bottom in the market.

Why? Because we already got it for small- and micro-caps, and for the biotech sector, too. And then the Nasdaq rolled over.

So mega- and large-caps in the S&P 500 were the last holdouts.

But this week, they finally caved, too…

After a brutal four-day sell-off, the S&P 500 Index officially closed in bear market territory on Monday.

Down, Then Up (Bigly)

Whether it’s psychological, fundamental, technical, or a combination of all the above, it doesn’t matter. Whenever the S&P 500 Index breaches that critical 20% threshold, it historically means a turning point is imminent.

More specifically, per the number-crunchers at Bespoke Investment Group…

Although stocks keep falling, the majority of the time, within 2 months of the 20% threshold being reached, the sell-off (thankfully) ends.

In other words, based on historical data, the next bull market could start within 60 days.

Even better, the post bear-market bounce represents a period of above-average gains for stocks.

Case in point: In the 12 months immediately after the 20% threshold was crossed for every bear market since 1946, the S&P 500 averaged gains of 18% over the next 12 months. That’s roughly double the long-term average annual return for the index.

But What about a Recession?

Last week, I wrote that everyone’s “infatuation with runaway inflation… has quickly progressed into downright fear over the dreaded ‘R’ word: ‘Recession.’”

So how does the likelihood of a recession impact stock-return expectations following a 20% pullback?

As it turns out (thankfully again), it doesn’t matter.

The data shows that, recession or no recession, stocks rally one-, three- and 12-months after a 20% decline. By a significant margin, no less.

But What About Inflation?

As you can see in the chart below, recession or no recession, stocks rally the majority of the time once inflation peaks.

Of course, we don’t know when inflation will peak until after it happens. However, as I shared last week, the market conditions are lining up to suggest that we’re at or past the peak. 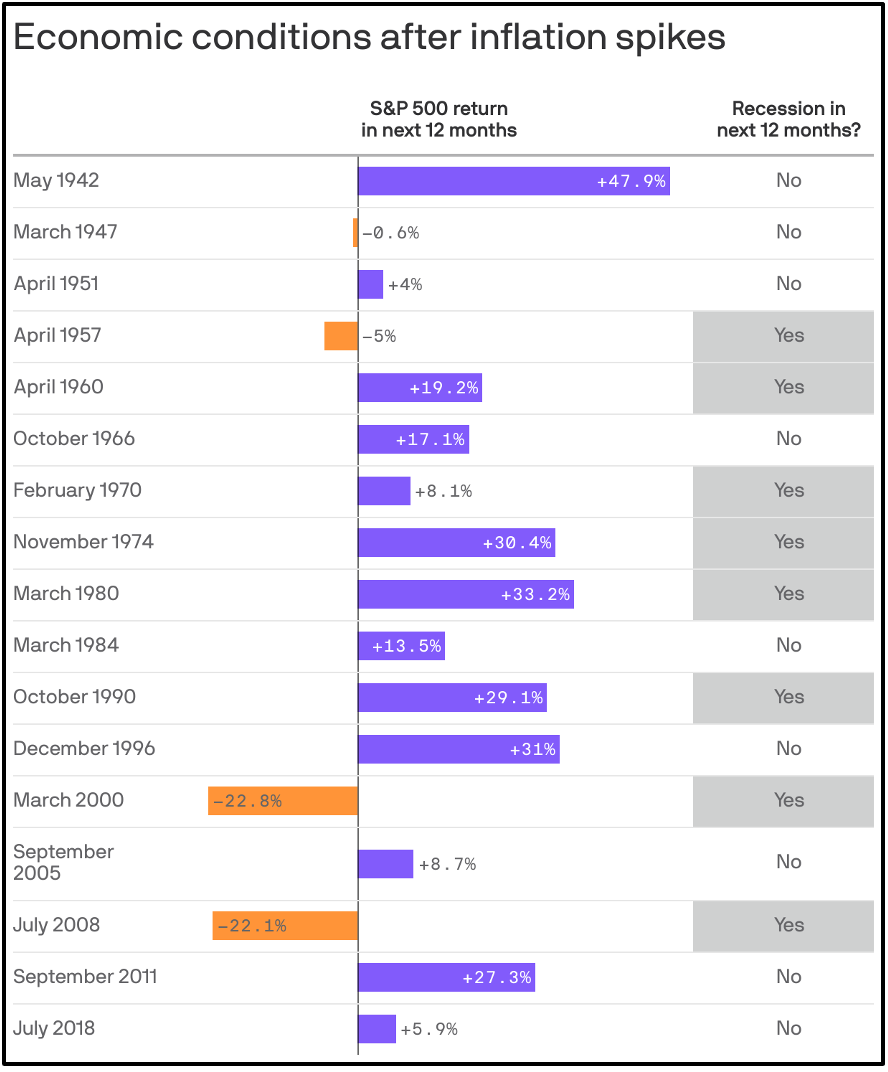 But What About All the Selling?

At this point, even with all the data to support being constructive and staying invested in stocks despite the trifecta of negativity (bear market, high inflation, and recession), I realize emotionally it’s not as straightforward.

Why? Because we’re suffering through a relentless sell-off, whereby over 400 of the 500 stocks in the S&P 500 Index sold off for four consecutive days.

In case you didn’t know, such broad and widespread selling is not the norm. In fact, it’s never happened since 1990. The closest we got was three consecutive days back in 2015.

So we’re living through a statistical outlier. (Aren’t we lucky?)

The good news? If we look at previously extreme, but not as extreme, readings of advancers and decliners in the S&P 500, the data again is instructive.

The longer period returns are significant (13% gains after six months and 21% gains after 12 months). And they happened the overwhelming majority of the time (greater than 88% of the time).

And tune in tomorrow…

That’s when I’ll share a fresh strategy and trade for Trend Trader Pro readers that’s all but guaranteed to profit — no matter what happens next with the stock market or the economy.

By the way, from now until July 1st, you can lock-in a LIFETIME subscription to Trend Trader PRO at a significant discount. Click here to learn more and upgrade today »