This week, I’m putting an exclamation point on some of the scariest and arguably stupidest investment decisions in recent times.

Consider this a warning to be smarter — or you might end up learning these lessons the hard way, too.

Now that we’re unofficially in a recession, which I’ve been warning about for months, it’s instructive to assess the financial health of consumers.

Why? Because we’re a consumption-based economy, and the quickest path out of a recession is going to be a rebound in consumer spending.

All I have to say is that we’d better pray the labor market keeps booming, because too many Americans are living paycheck to paycheck.

As you can see, literally millions of people don’t have a penny to absorb the shock of soaring prices and an economic slowdown. 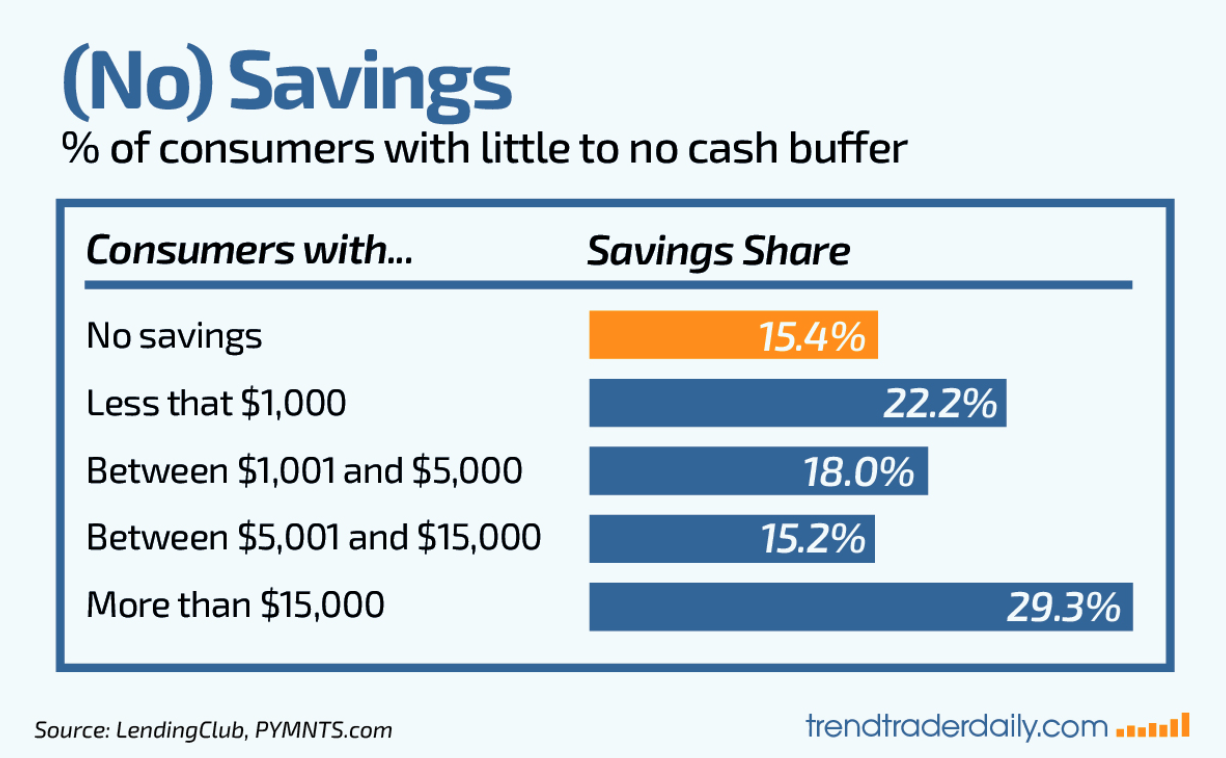 I’ve shared before that stocks love jobs. But with no savings, this reality promises to be all the more true in the current market.

While living without savings might be scary, imagine thinking you were investing in a stable, foreign currency only to find out that you’d purchased wildly overvalued shares of a three-year old fintech company.

No, this isn’t the lead story for The Onion. This is 100% real speculative stupidity.

Investors bid up shares of Hong Kong-based AMTD Digital Inc. 14,000% in less than a month. 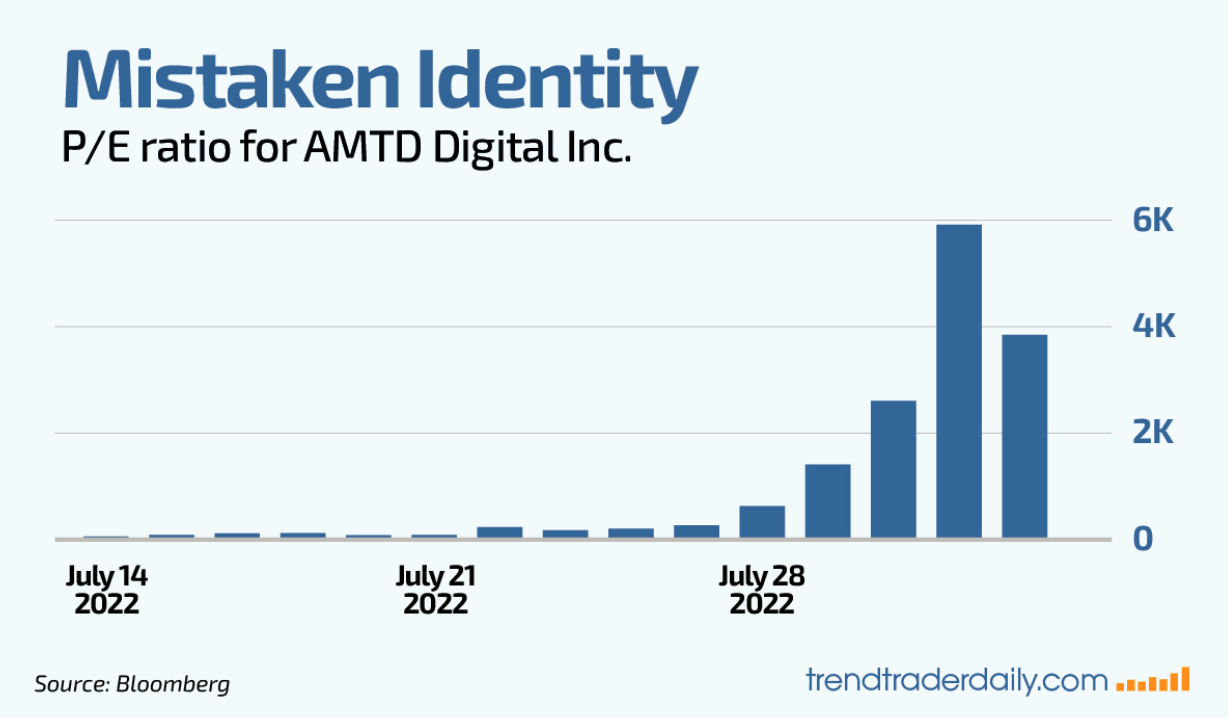 It’s now trading at an unthinkable valuation that’s four times as much as the $115 billion market cap Goldman Sachs (GS) or about 4000x times earnings. (That’s not a typo.)

So what’s going on?

“AMTD Digital has an interesting stock ticker — HKD, better known as the abbreviation for the Hong Kong dollar. Meanwhile, the ticker of AMTD Idea is AMTD — curiously close to AMD, for Advanced Micro Devices Inc., a $158 billion company with a far bigger public float that has rallied 33% since the start of July.”

Sure enough, AMTD tops the list of the most-mentioned stocks on Stocktwits.

Of course, we all know how every meme-stock story ends.

AMTD won’t be any different. Countless investors, however, appear destined to learn this lesson the hard way.

Just like Facebook’s name change to Meta Platforms, Inc. (META) was nothing more than an investor relations scam — remember, the company makes 97% or more of its revenues from ad sales, and zilch from the metaverse — the entire metaverse is turning out to be a scam, too.

As you can see, trading volumes and prices for “virtual” land plummeted. 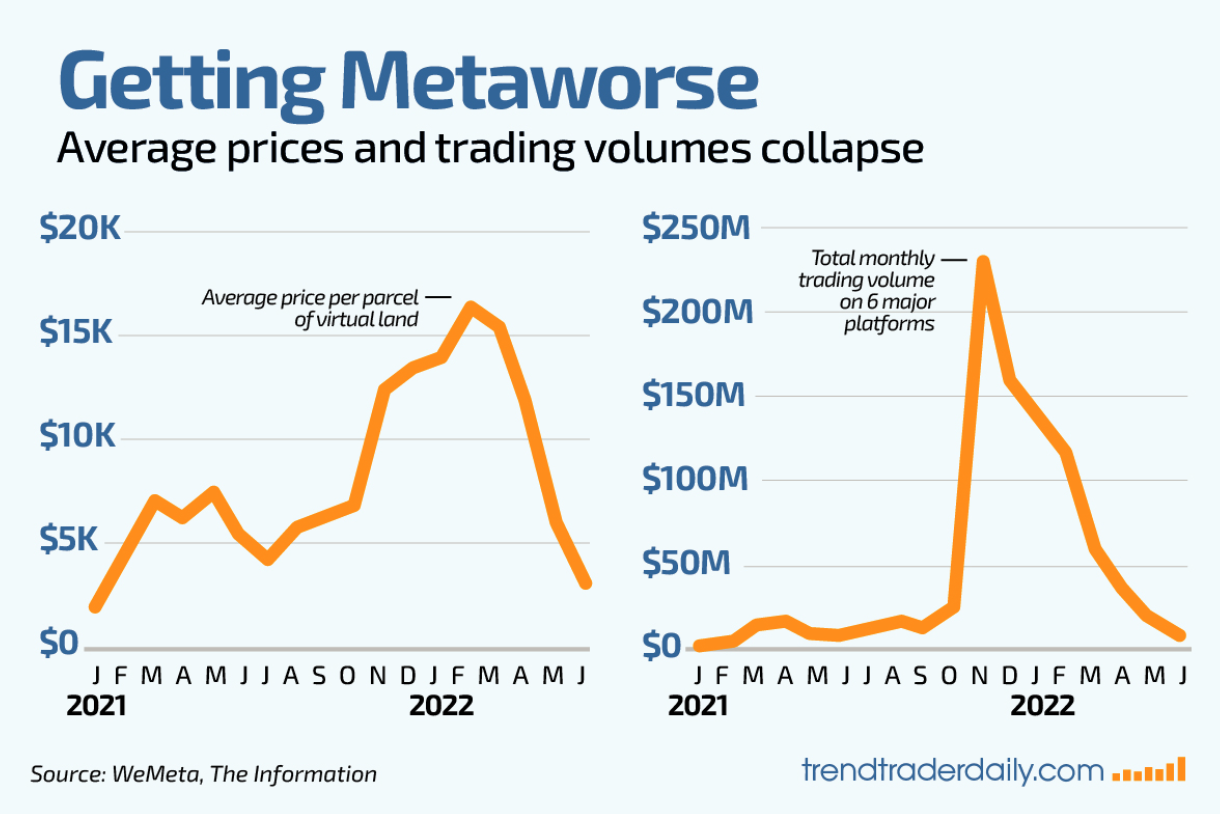 Or if you prefer to sugarcoat it, as Eric Klein, founder and CEO of metaverse real estate firm MetaSpace REIT told The Information, “The metaverse had so much hype at the beginning of the year and we’ve kind of lost it.”

I guess Klein and his ilk who still believe the metaverse will “come to fruition within the next couple of years” are gluttons for punishment… and more losses.

Thankfully, we should be able to turn their misfortunes miscalculations into profits for ourselves with the Trend Trader Pro “Trade of the Week.”