Can I get a whoop whoop? Because it’s Friday in the Trend Trader Daily Nation.

That means slinging words takes a backseat to flashing pictures, so I can quickly convey an important investment insight or two.

Quick is important, especially today, since I have to rush off to Fox Business studios for an appearance on “Making Money with Charles Payne” at 2:15 pm ET.

Tune in if you’re around. We’ll be talking about the 10 worst performing stocks in the S&P 500 and sharing which ones we think are worth buying or selling short. (Yes, there’s more downside ahead for some of them.)

Getting back to the charts… this week I’m dishing on the biggest risk to my biggest bullish call, and highlighting how absurdly cheap valuations have gotten in one area of the market.

Bullish, But Not Blindly

After yesterday’s impassioned and uber bullish take on the semiconductor industry (see here), I wanted to assure you that I’m not blind to the one risk that could upend it all.

In a word, China.

As you can see in the chart below, Taiwan is responsible for the overwhelming majority of chip manufacturing, based on revenues. And increasingly so. 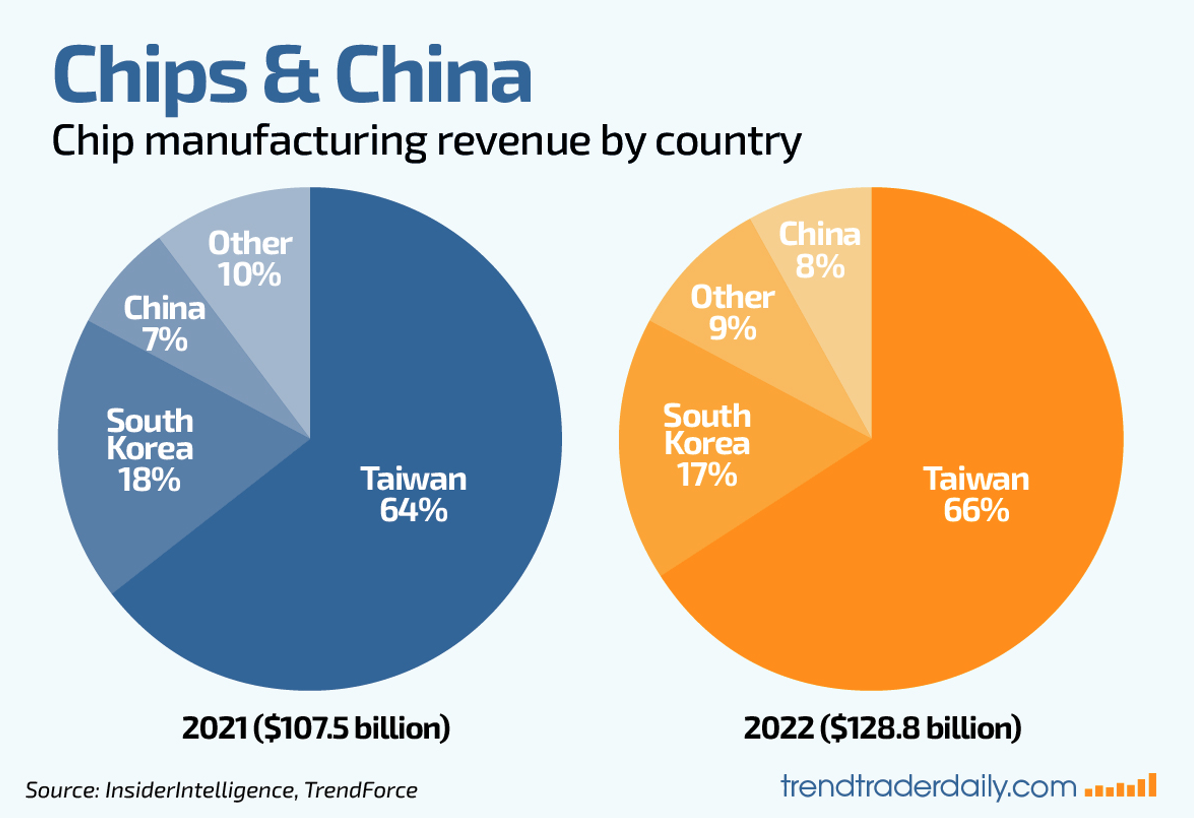 If China ever decides to invade Taiwan, chip stocks would sell-off in a panic until some semblance of order is restored.

Granted, such an invasion would pose major problems for other areas of the markets, too. As we’ve learned from the Russian invasion of Ukraine, no investments like war. Not even gold.

Use trailing stops on any semiconductor stocks, just in case.

And hope and pray China doesn’t get aggressive.

But keep some cash on the sidelines just in case, so you can pounce on the bargains that would immediately materialize. Because nothing can hold chip stocks down over the long-term. Not even China.

A few weeks ago, I alerted you to the relative bargains in small caps.

You’ll recall, they’ve only been cheaper one time on a forward price-to-earnings ratio basis, which was during the financial crisis. 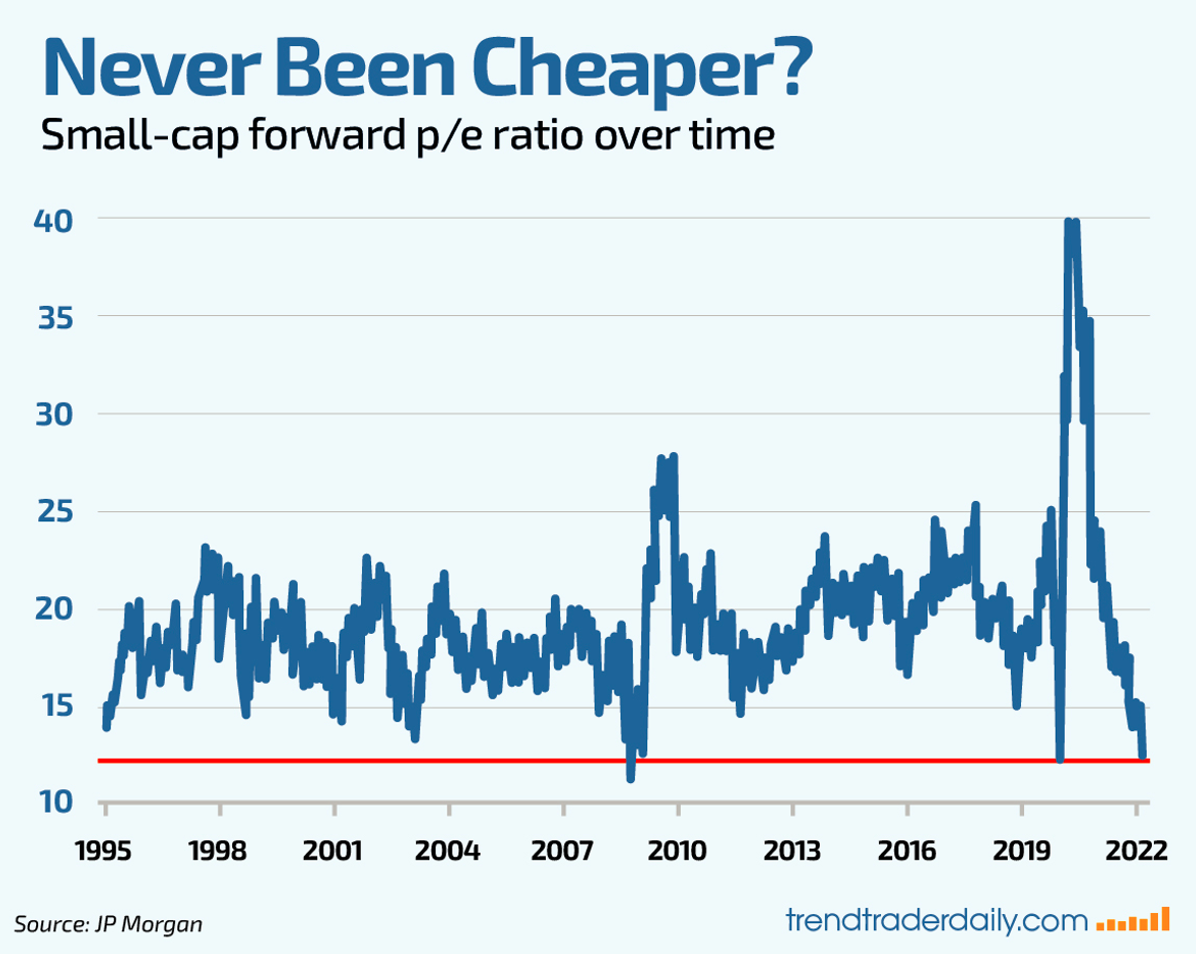 Well here’s another data point to add to the bullish call for small caps.

In this case, small caps have never been cheaper versus large caps on a price-to-earnings ratio basis. Not by a long shot. 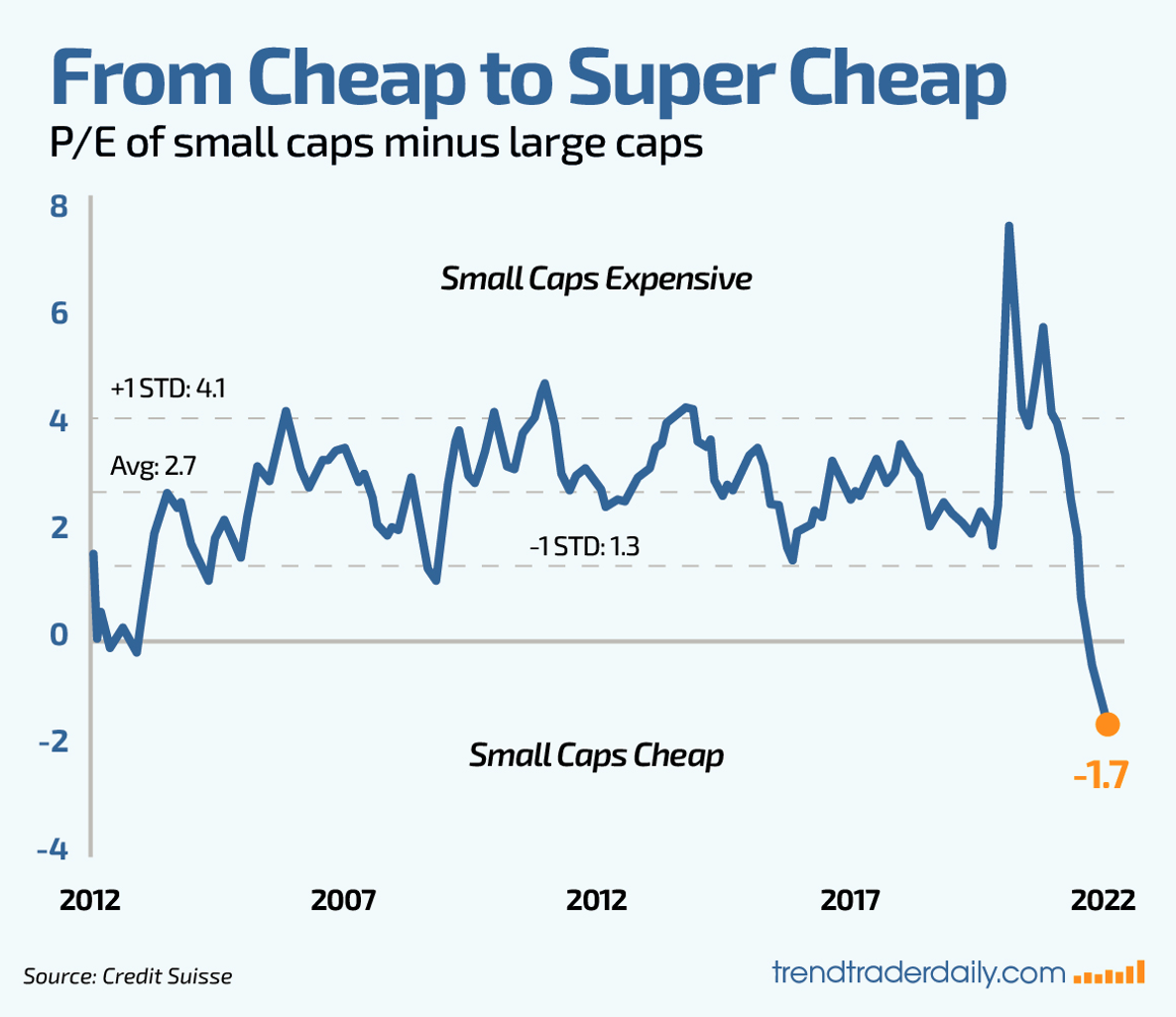 The takeaway: It’s time to load up on cheap small caps.

If you’re short on ideas, I’m crunching the numbers on a few ideal candidates now, and will be sharing at least one of them with Trend Trader Pro readers next week.

So stay tuned… and sign up for a risk-free trial if you haven’t already.