Debunking the Myth About Chips and Bitcoin

Or as I like to say it, “Stay humble in the markets or you’ll be humbled by the markets.”

Why bring this up?

First, because a generation of neophyte investors in crypto are learning this lesson the hard way, as Bitcoin’s dropped more than 70% from its record high, erasing some $2+ trillion in digital wealth. (Click here to find out why I believe now could be the perfect time to profit from crypto — without buying a single Bitcoin.)

Second, because seasoned investors, including my colleague, Andrew Zatlin, are responding to the crypto crash by warning about the next crash.

Or, as he said recently, “Now that cryptos are cratering, the demise of semiconductors is close behind.”

Suggesting that the fate of a technological innovation first patented in 1901 that’s become literally essential to everyday life is somehow inextricably linked to a digital currency experiment that began in 2009 is laughable.

You know, the theme about living in an Era of Tech-biquity that I’ve been pounding the table on for years.

Well, here’s the proof to back up my stubborn and deserved conviction...

When the Consensus is Wrong

The common consensus about the semiconductor industry is that it’s nastily and notoriously cyclical.

Therefore, when we enter the downturn of a cycle, we should avoid semi stocks like Monkeypox because the sales and profit declines — and in turn, the share price declines — will be similarly nasty and painful.

Operating with this (faulty) understanding of semiconductor demand, Mr. Zatlin and others would like you to believe Bitcoin is indeed the fundamental reason semiconductors will suffer their next nasty downtick in demand.

Not true! But I’ll get to that point in a moment.

First things first, we need to dispel the primary misconception that semiconductor demand is even the least bit cyclical. Bitcoin or no Bitcoin.

Thankfully, all we need is a Kindergartener's comprehension skills and a chart or two to do so.

As I’ve shared before, when it comes to math and the markets, there are four clearly defined patterns. They all relate to some variable over time, as you can see in the illustration below. 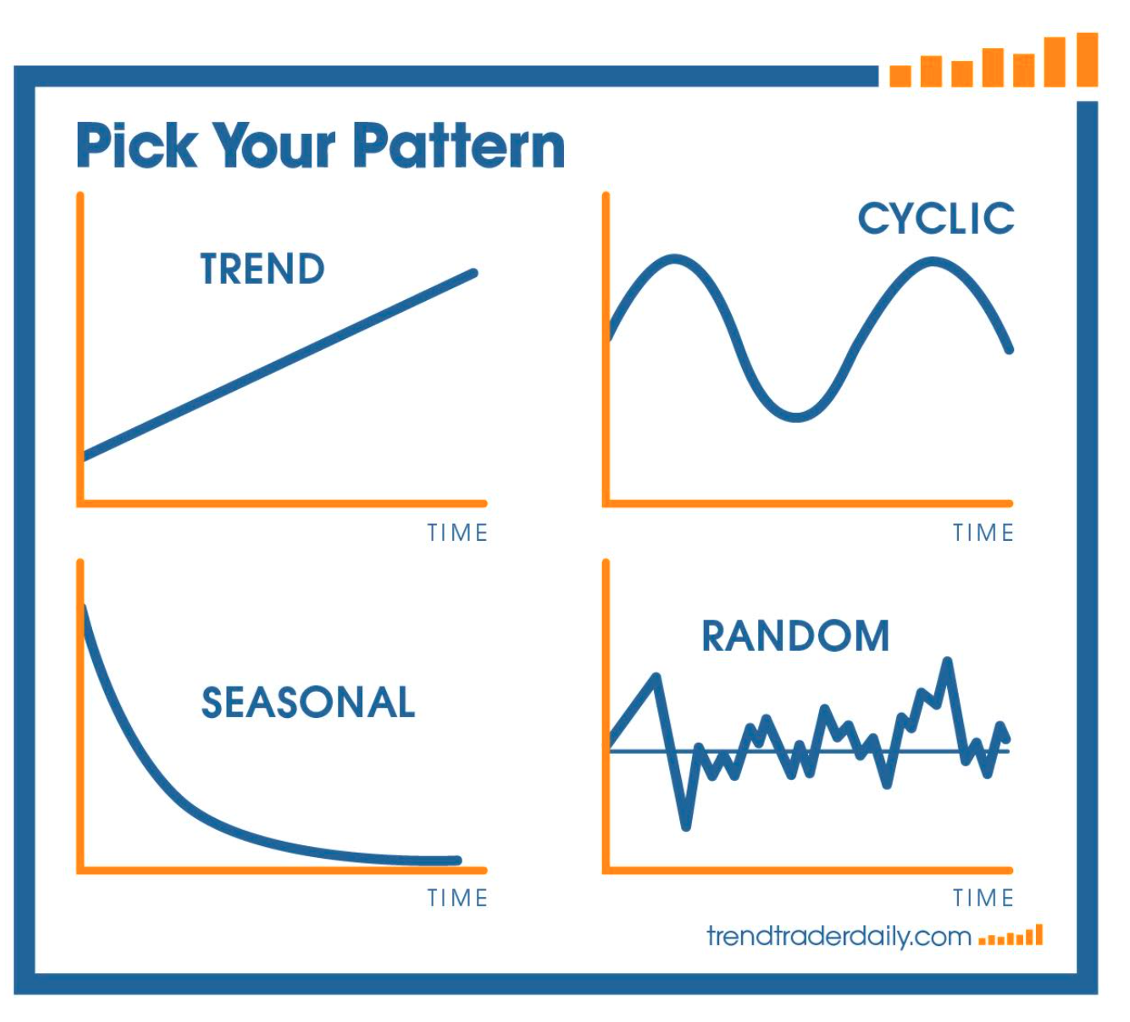 With all that fresh in your mind, now let’s look at semiconductor unit growth over the last four decades. 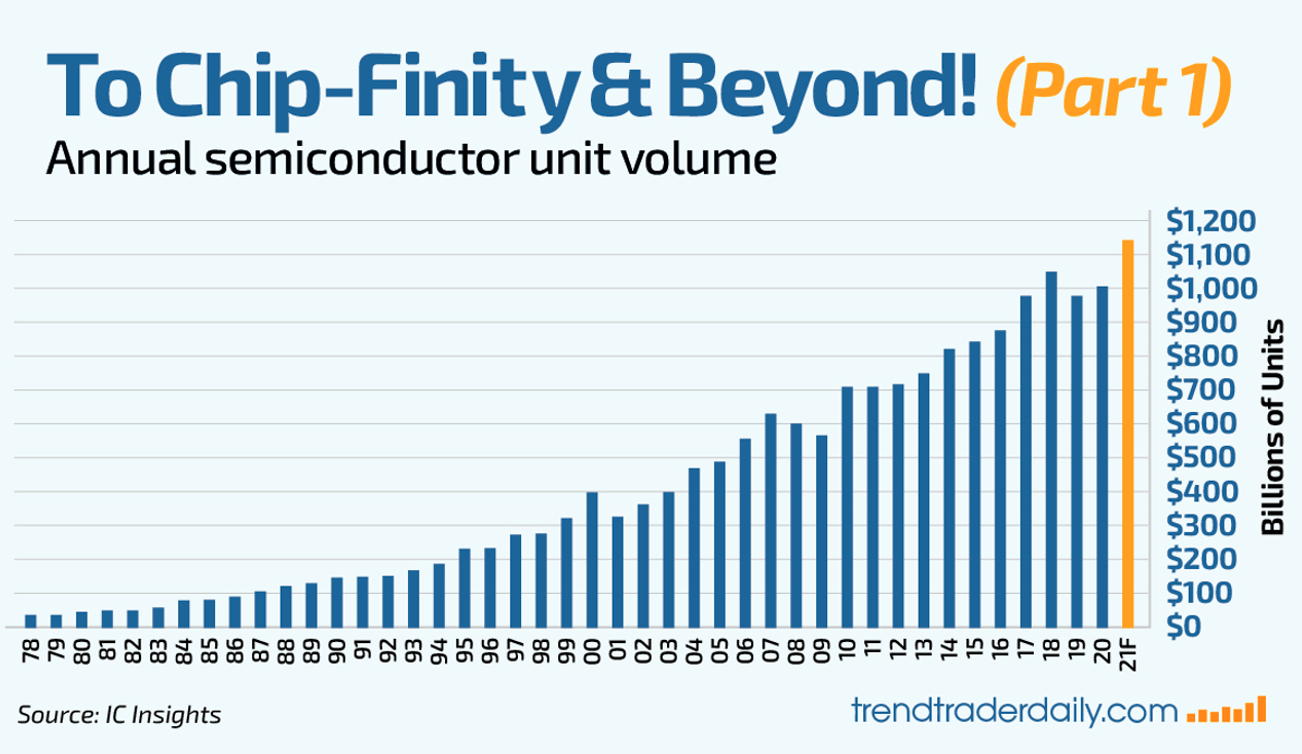 Do you see a pattern? Me, too. And it’s not cyclical!

It’s a definite trend pattern: up, up, and way to the right.

Truth be told, there’s only been a single time when chip demand declined year-over-year for two consecutive years. And that was right after the financial crisis.

If we charted annual chip revenue, instead of volumes, the same pattern would hold.

In other words, even global systemic slowdowns can’t put a stop to the semiconductor trend that’s going to quickly top $1 trillion.

But what about a $2 trillion crypto collapse?

It’ll be Different This Time… or Not!

Mr. Zatlin and his ilk would like us to believe it’s going to be different this time. Why?

Because cryptomining allegedly generated inordinate amounts of demand for chips. But with the decline in value for Bitcoin, such endeavors are no longer profitable. Therefore, all that extra demand for chips is going to dry up as new miners stop coming online.

Sounds reasonable. The only problem? Crypto chip demand didn’t really add up to much. No more than 10% at the peak in demand in 2018.

Let’s take a look at a specific example, the $385 billion market cap, NVIDIA Corporation (NVDA), to really prove the point…

In the first quarter of last year, sales for its mining processor units accounted for a measly $155 million (or about 3%) of its $5.7 billion in quarterly revenue.

If we fast-forward to the first quarter of this year, NVIDIA stopped providing a specific number for mining processor units and instead simply stated that they accounted for a “nominal” amount of revenue.

Even if we assume that “nominal” amount literally equals zero cryptomining sales in the last quarter, you want to know what impact that had on the company's overall results?

Case in point: In the same quarter of “nominal” crypto sales, NVIDIA’s overall sales rose 46% year-over-year and 8% sequentially to $8.3 billion.

I’m sorry. But not a single major chip manufacturer CEO is losing any sleep about the slump in crypto chip sales.

Truth is, they never really need to lose sleep about demand because there’s always a new growth trend in tech that requires more chips. As soon as one trend starts to wane, at least one or two more new trends are maturing to make up for any lost demand and then some.

Before Bitcoin, it was gaming. After Bitcoin, it’ll be artificial intelligence and machine learning and automation and self-driving cars and cloud computing and (you get the point).

Why then are chip stocks seemingly trading in lock-step with Bitcoin?

After all, as Mr. Zatlin convincingly notes, over the last five years “There’s a strong correlation between the market performance of cryptos and semiconductors.”

Therefore, since Bitcoin is cratering, it’s only a matter of time before semiconductors do the same.

For those unaware, correlation is a financial metric ranging from -1 to 1 to determine how little or how much two assets move in relation to each other.

But here’s the rub with correlations: they can be completely misleading. And that’s certainly true in this case.

Correlation Does Not Equal Causation

Just because two assets move in strong correlation doesn’t mean one is causing the other’s movements.

Don’t believe me? Thought you might not, so I ran a laundry list of correlation calculations for Bitcoin versus other investments over the last five years.

Here are the results of the ones with higher correlations than the two chip makers Mr. Zatlin singled out as particularly vulnerable:

Now, ask yourself, does Bitcoin have anything to do with demand for healthcare or transportation or homebuilding?

Not one iota. And yet, the price movements are very strongly correlated.

Correlation does not equal causation. So the last thing we should do in response to Bitcoin cratering is to bail on or sell short semiconductor stocks (or healthcare stocks or consumer discretionary stocks or homebuilding stocks, etc.).

Rather, the only basis for buying or selling any stock should always be the individual fundamental outlook.

And I’m sorry, but the long-term fundamentals only keep getting better for semiconductor companies. So I’ll happily keep betting on them, no matter what happens with Bitcoin next.

I’ll also happily debate Mr. Zatlin on this topic – and place a friendly wager on it, too.