Earlier this week, streaming giant Netflix, Inc. (NFLX) reported that it lost nearly 1 million subscribers. And yet the stock rallied on the news!

Is it time to join the buyers and scoop up shares of the battered growth stocks that have lost 70% from their pandemic peak?

Despite some pundits’ insistence that Netflix is now a value stock, it’s headed lower over the long-term, due to undeniable and unstoppable headwinds as well as a deterioration in its core business.

Netflix and No More Chill

As I warned on the “Mornings With Maria” show on Fox Business earlier this week (click on the images below for the replays), the streaming trade is running out of steam. 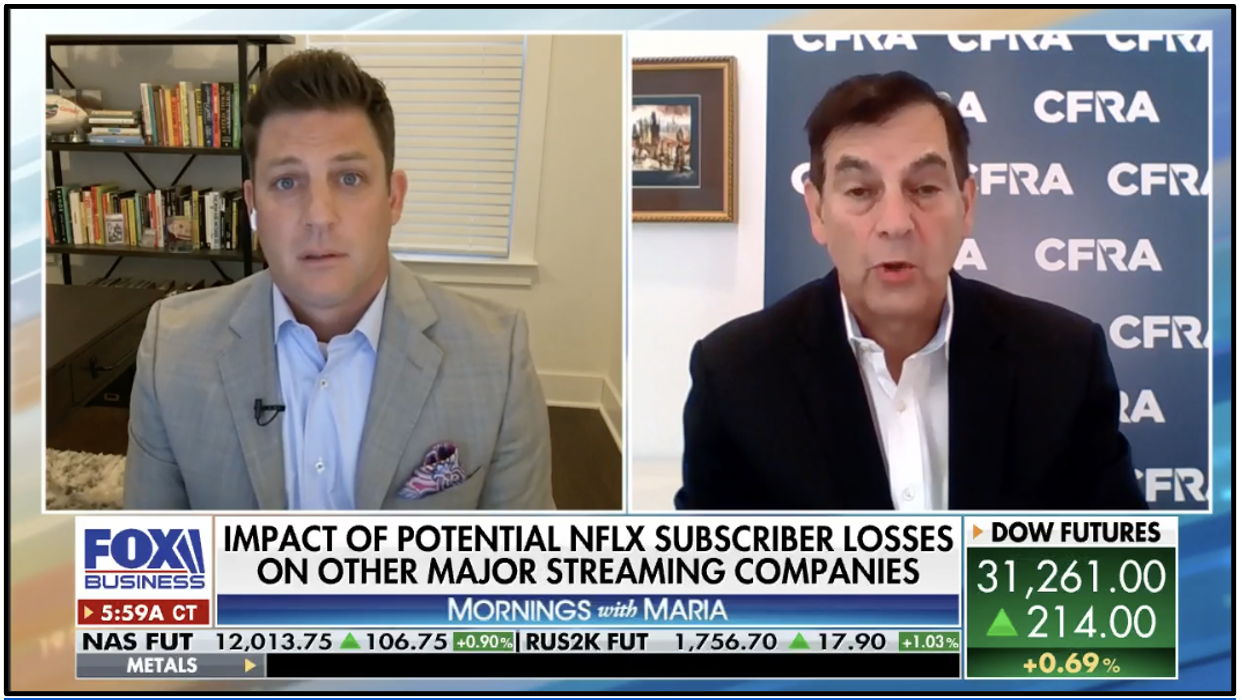 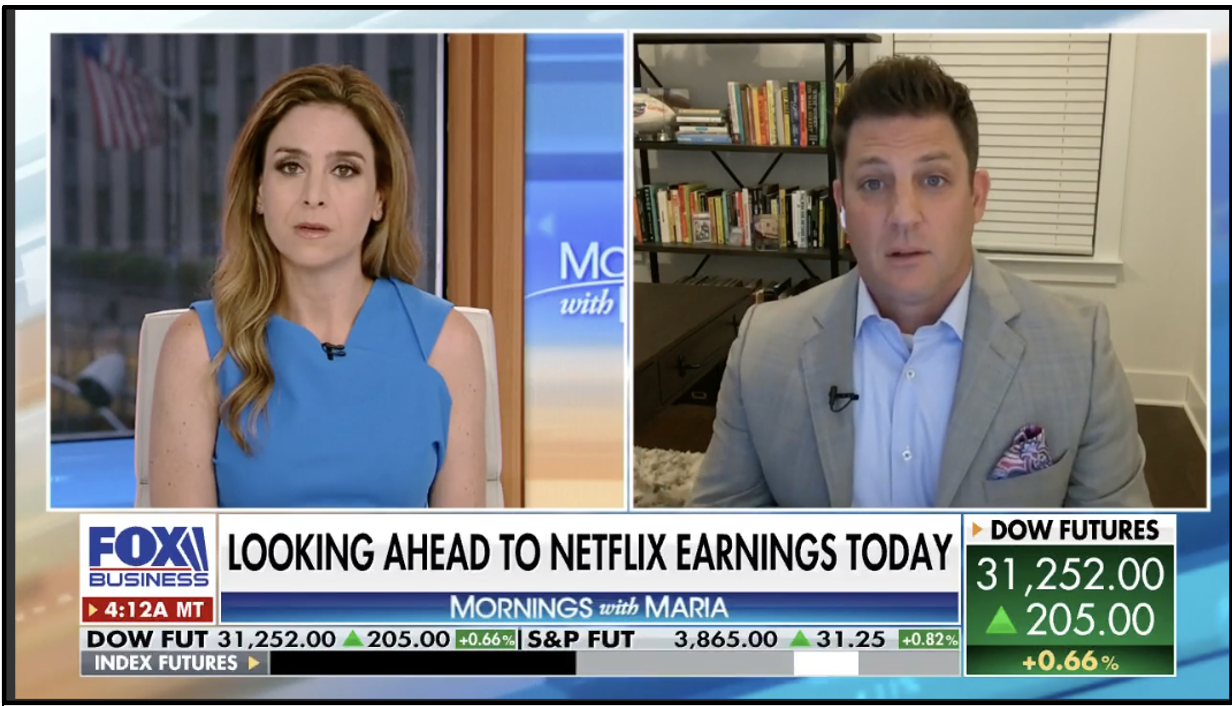 Simply put, consumers overindulged, signing up for an average of 4.7 services per household, and now they’re cash-strapped as they contend with soaring inflation and a potential recession.

What’s more, there are no more low-hanging subscribers for Netflix to sign up to make up for the cancellations…

When the Growth Dies

As you can see, Netflix’s highest paying (and therefore, most valuable) customer segment is the U.S. and Canada. But subscriber growth in those regions has essentially plateaued at just under 75 million. 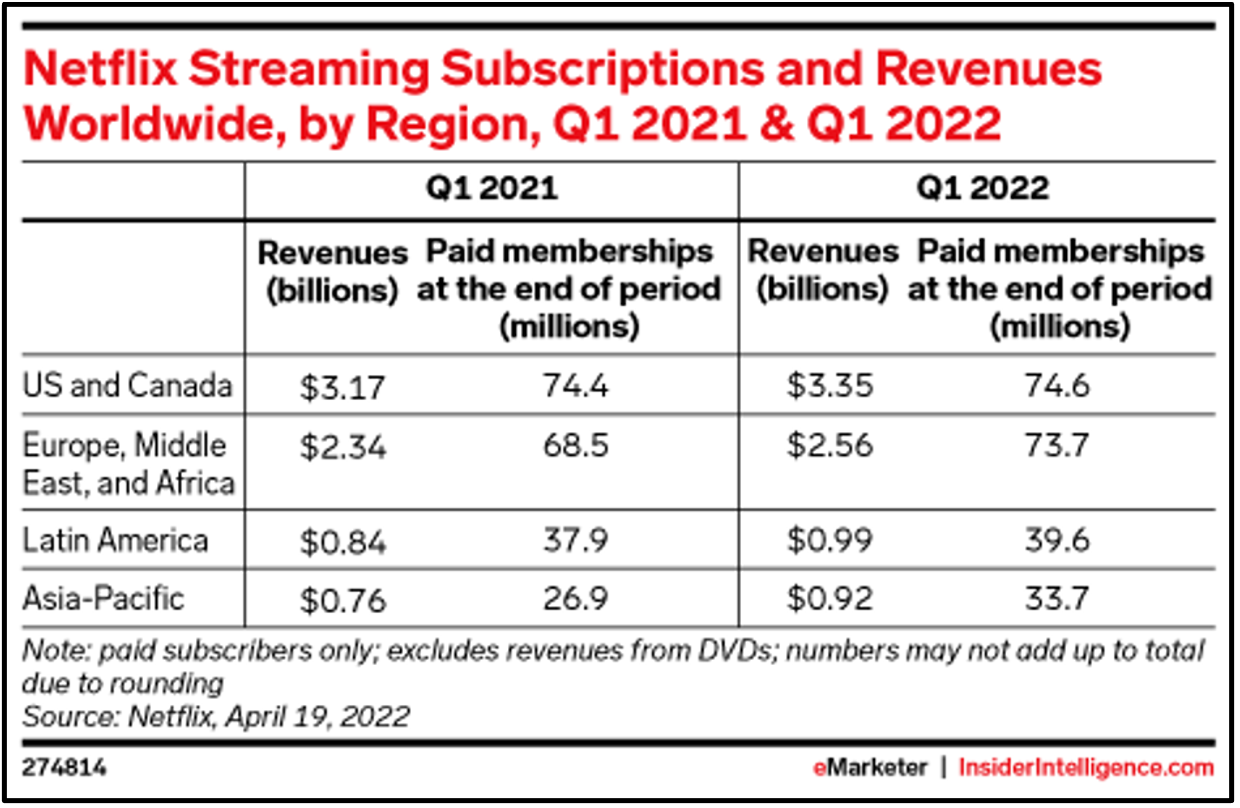 The only meaningful growth spot appears to be the Asia-Pacific region. But even that’s showing signs of plateauing. Not to mention, those subscribers generate the least amount of sales per month.

Unfortunately, swapping out higher paying U.S./Canadian subscribers for lower paying ones isn’t a model for future growth and profits.

But let’s forget the regional growth trends and look at overall subscriber growth trends instead. When we do, the picture gets uglier. Fast.

Against this backdrop of slowing growth as part of the maturing streaming industry, Netflix stubbornly keeps overspending on content, about $17 billion this year.

The end result? Netflix had a good run of unfettered growth for a decade. But now it’s over.

While analysts at Morgan Stanley want to downplay the latest trends in the business as the “first streaming recession,” it’s much more severe than that.

Streaming has become a commoditized product with so many competitors that all the margins are about to be squeezed out of the industry.

Add in runaway inflation and the additional strain it puts on discretionary spending, and the subscriber trends will only accelerate from here. In the wrong direction.

Sure, Netflix wants investors to believe it can reinvigorate growth with ad-supported tiers and finally start charging for households that are using someone else’s account.

But such moves smack of desperation. And in the end, they won’t overcome the underlying problem of saturated markets, too many streaming choices, and no switching costs.

All that being said, the fact that investors applauded and bid up shares on “less bad” results proves the current tech sell-off is overdone.

That means we’ve likely put in a market bottom. That’s why we should expect any of the big tech companies that report better-than-expected results next week with well intact growth trends to stage major rebound rallies.

If I had to pick two from the bunch, I’d put my money on Microsoft and Apple.