If you’re new to the Trend Trader Daily Nation, here’s the rundown…

Each Friday, I embrace the adage that “a picture is worth a thousand words,” and hand-select compelling graphics to put important investment news into perspective.

All it takes is a quick glance and you’ll be up to speed.

More specifically, it’s good for the entire biotech sector — and it’s good for a specific investment I’ll be sharing with you today.

Last week, it was all about the Presidential election. This week it’s all about a Covid-19 vaccine.

In case you pulled a Rip Van Winkle, Pfizer Inc. (PFE) and partner BioNTech announced a vaccine that is 90% effective.

First, because we need a damn vaccine to have any hopes of life returning to normal.

And second, because its effectiveness is better than expected!

You see, for months, researchers cautioned us that a vaccine might only be 60% to 70% effective.

So on the heels of such positive news, stocks surged to new highs. And then?

Well, then the Russians announced that they’d developed a vaccine that’s 92% effective. Way to go, comrades! But a global tit-for-tat over vaccine supremacy isn’t the point here…

The point is, multiple vaccines now exist. And many more are coming. Take a look: 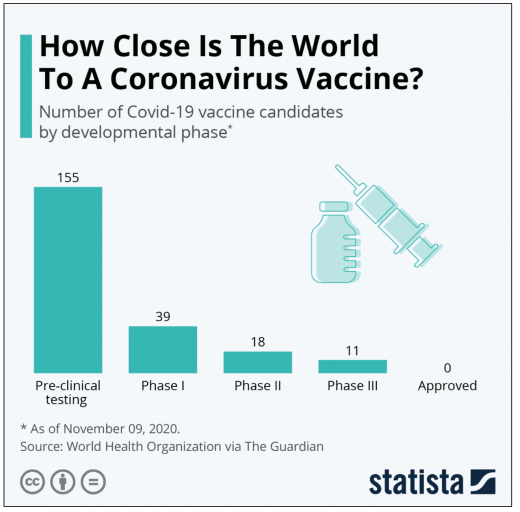 The chart above is based on data from a few days before the Pfizer news.

It shows very clearly that many more vaccines are in the works. And if the two early vaccines have already proved effective, it stands to reason that a meaningful number of others in process will be, too.

In a year full of so much fear, hardship, and uncertainty, I can’t think of a bigger moment for biotech and hope!

(Speaking of big biotech moments — the chance to pocket profits of 1,311% could be coming as soon as December 5, 2020. Make sure you sign up here to get all the details).

Get Ready to Roam the World Again

I can’t think of a single industry that should be more ecstatic about the vaccine news than the travel industry.

It’s been on life support ever since the pandemic hit. In fact, the latest data shows that travel routes keep pulling a Houdini and disappearing.

As Bloomberg reports, “A decades-long aviation boom spawned a network of nearly 50,000 air routes that traversed the world. In less than a year, the pandemic has wiped almost a third of them off the map.” 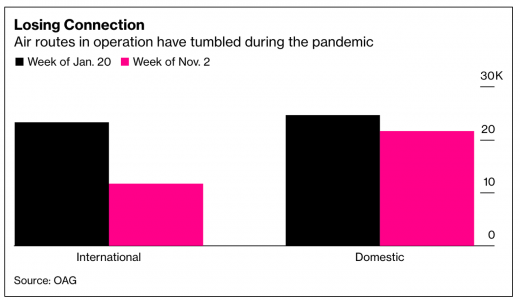 I warned readers about investing prematurely in an airline and travel rebound back in June. But now that a vaccine is going to be available soon, it’s time we start considering the opportunity.

After all, once people are free to roam the world again, low fuel costs and reduced capacity are going to set up the perfect storm for robust profits.

If you don’t want to worry about picking the single best airline or travel stock, there’s an ETF cure for that anxiety: the U.S. Global Jets ETF (JETS).

JETS tracks an index of companies involved in the air travel industry, including airline operators, manufacturers, airports, and terminal services.

Truth be told, it’s the only true pure-play travel ETF on the market.

So put it on your watch list. I’ll be sure to let you know when it’s time to board before takeoff.