Investing in the Digital Garden of Good and Evil

Is technology inherently good or evil?

Before you answer, remember that Google’s corporate culture was founded on the motto, “Don’t be evil.” Yet in 2018, the company suddenly ditched the clause from its code of conduct.

Coincidence? I doubt it. Especially when we consider the behavior of other big tech companies, like Facebook (FB).

As I shared with Maria Bartiromo on Fox Business this morning (see here), Facebook seemingly operates under the motto of “Don’t get caught.”

But it always does get caught!

From the Cambridge Analytica privacy scandal... to failing to moderate content and fake news... to the latest uproar over pausing plans for Instagram Kids after its internal research got leaked that revealed the negative mental health effects of social media on teens. The list goes on and on.

Why bring any of this up? It’s simple, really:

Technology has become the epicenter of wealth creation.

Google and Facebook, for example, are up a staggering 5,030% and 890% from their IPOs, respectively.

As investors, we can’t afford to miss out on such historic wealth grabs, right?

Or can we? And more pressingly, should we?

Tech Gets a Dose of Morality

Did you ever truly stop to think that not all technology — and, therefore, not all profits earned from technology investments — is good?

Or more simply, is some technology evil?

“The Internet, and technology in general, have provided new ways for wrath, lust, gluttony, sloth, pride, envy and greed to insert themselves into our lives.”

Also consider that I’m a technology investor and analyst. Therefore, my livelihood depends on finding, investing in, and sharing new technology opportunities. So this isn’t a self-serving exercise.

On the contrary… convincing you to look at the world this way could directly and negatively impact my bottom line.

Lastly, consider that the bar to qualify as “evil” isn’t as high as you might think.

I’m certain we can all think of technologies that cause harm. Some overtly… others covertly.

As a father of two daughters, I can tell you that the recent revelation that Facebook “make[s] body image issues worse for one in three teen girls,” unequivocally qualifies as causing harm, and by extension can be considered evil.

Add that to the company’s never-ending list of privacy violations and I’ll never own the stock. On principle alone.

I’m not asking you to follow my lead on Facebook. I’m simply asking you to consider the possibility that all technology investing isn’t good.

To help you do that, consider the words of much smarter men than me, as they warn us about one of the most promising emerging technologies of our day — artificial intelligence.

As famed physicist Stephen Hawking told the BBC, “The development of full artificial intelligence could spell the end of the human race.”

Do you want any part of investing in such a technology? Even if you did, it would be hard to spend the profits you earned if we no longer existed. So your gains would be useless. Just saying.

Getting back to the issue at hand, some will argue that technology can’t be evil because it’s simply a tool. Therefore, like money, it’s amoral. It only serves to amplify the good or evil of the one wielding the tool. In this case, humans.

That’s true. But it’s also true that every tool has an overarching purpose — and, in turn, an embedded morality.

So again, why am I bringing all of this up? Because I believe it’s an increasingly urgent matter.

A convergence of advancements in miniaturization, processing power, materials sciences, bandwidth and storage, to name a few, are conspiring to accelerate innovation and adoption of new technologies. 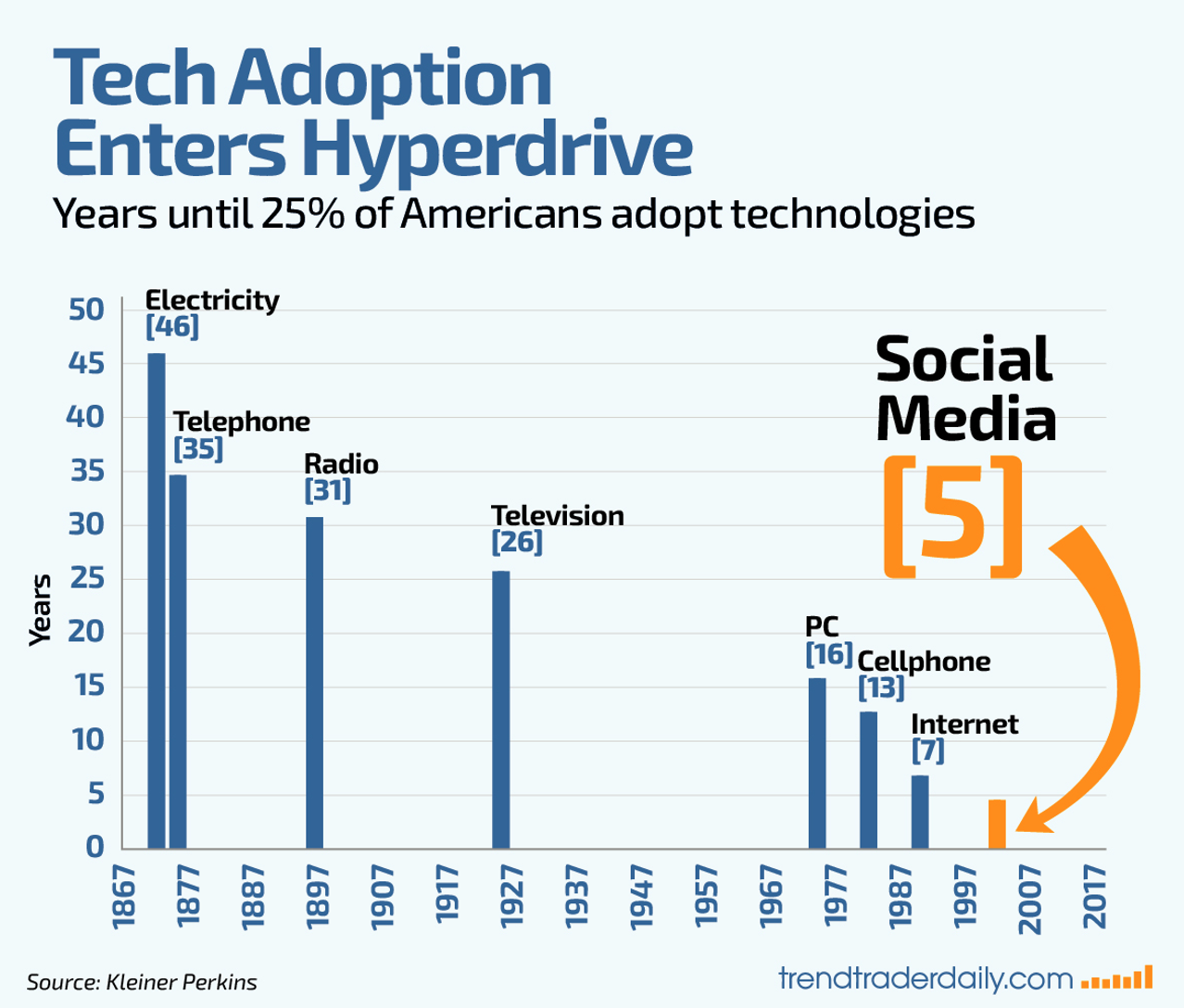 It used to take decades for a new technology to achieve 25% market penetration. Now it takes less than five years. Undoubtedly, that figure is going to keep going lower and lower.

What does this mean?

Well, our forefathers had time to digest and process the potential evils of new technologies – because these innovations were slow to take root in everyday life.

But now we’re living in a time when new technologies are being developed and adopted at a faster rate than ever.

Time is no longer a luxury we possess to exhaustively explore the potential good and evil of every innovation.

If we don’t figure out where we stand on the front end, we’re locked into paying the consequences on the back end.

There’s no hitting the brakes once a new technology gains enough momentum.

Once the first robot starts thinking for itself and decides it wants full autonomy, it’s over.

There’s no putting that genie back in the bottle. We’re putting all humans in a casket.

Again, we need to define the boundaries in advance.

For those who insist that we can’t possibly agree on a universal morality as a society, you’re wrong.

There might be finer and grayer points that are impossible to reconcile. However, religious luminaries, as well as secular thought-leaders agree — we’ve all been imprinted with an inherent morality.

So there are definitive goods and evils we can all agree on, no matter our background.

The Moral and Financial Challenge

To be clear, I’m not writing today to protest progress. I’m challenging us to ponder the morality of progress and the potential pitfalls before it’s too late.

Of course, first, you need to decide if this is an issue worth consideration. Then, you must figure out what you believe. And that’s where I’m (hopefully) going to come in.

In the coming weeks and months, I’ll be dedicating time to explore these issues for a growing list of emerging technologies — including artificial intelligence, drones, robotics, cryptocurrencies, virtual and augmented reality, gene editing, cybersecurity and brain interfaces.

(If you have any specifics you’d like us to evaluate, let me know by simply replying to this email.)

Whereas the mainstream financial press only considers the wealth-producing power of these advancements, we’re going to focus on the threats and the opportunities. Both direct and indirect, in the present and in the future.

So yes, you’ll still be receiving a healthy dose of technology and trend investment ideas from me. But you’ll also be receiving another perspective on them.

After all, as Marvin Minsky, co-founder of the MIT Artificial Intelligence Laboratory, says, “You don’t really understand something if you only understand it one way.”

We’re not going to try to arrive at any definitive answers, mind you. Instead, our overarching goal is to provoke you to seek answers — and then act and invest accordingly.

If you think this is all a pointless exercise because we don’t (or can’t) have any impact as individuals, think again!

Beyond being investors, we’re consumers of all this technology. Without customers, there’s no way for a business to survive or a technology to endure.

In other words, every time we decide to tweet, snap, buy a smartphone, hail an Uber — any interaction we have with tech on a daily basis — we’re enabling technological progress and, in some cases, evil.

By the same token, we can impede this progress and redirect it in more appropriate directions. And there’s tremendous power in our collective efforts to have a direct and lasting impact.

Bottom line: We have the ability — and the responsibility — to impact tomorrow. I’m going to start taking these abilities seriously here. Ultimately, instead of interrupting our pursuit to increase our bottom lines, it should enhance it.