Is This Technology the Next Big Thing?

Set your calendars for April 2022…

That’s the month and year that the next futuristic consumer tech device officially goes mainstream… and the smartphone officially dies.

At least that’s what a top scientist at Facebook predicted. And I agree — give or take a month or two!

In all seriousness, it might come as a shock to longtime readers that I’m calling for the end of the smartphone boom.

After all, for the better part of the last decade, I’ve boldly proclaimed, “The exploding use of mobile devices promises to be the fastest-growing — and possibly biggest — technological trend ever.”

But the data don’t lie. And in this case, the trend is officially dead.

The Smartphone Boom is Already Dead

Right now, smartphone adoption in the United States stands at roughly 80%. And the last 20% never comes easily, quickly, or profitably — especially for investors.

So for all intents and purposes, the smartphone boom is already on death’s doorstep.

If you need more proof, consider that global smartphone sales peaked years ago (2016), as you can see in the chart below. And the dynamics of the market now resemble the PC market, which peaked in 2011 and then steadily declined every year thereafter. 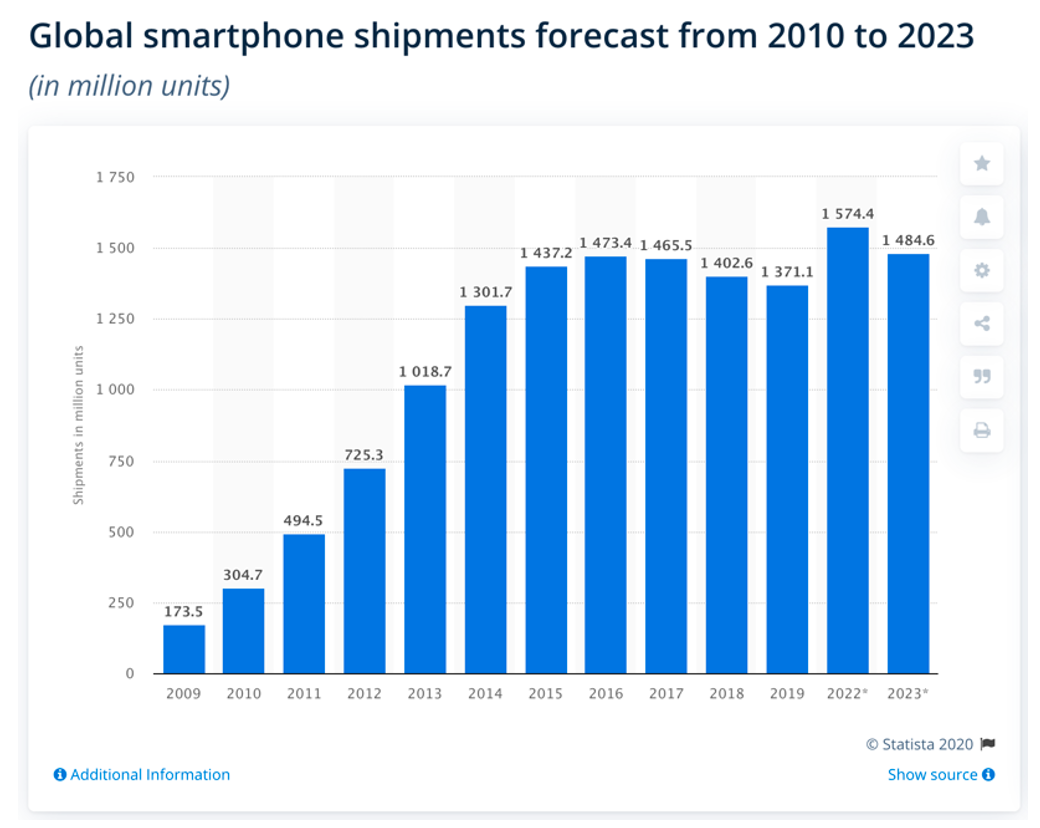 I’m sorry, but if a tech trend isn’t growing at a healthy double-digit clip, it’s dying.

And in this case, we can forget about any technological leapfrogs — like multitouch interfaces or fingerprint sensors — resurrecting smartphone growth like they did in the past.

Why? Because true smartphone innovation is dead, too.

If you have any doubt, pick up the latest devices from Samsung, Apple, and Huawei. You’ll notice very few differences. Consequently, all that’s left is the potential for incremental improvements.

We’re just at that point in the irrefutable cycle of technology development and adoption for smartphones.

“New technology of any kind tends to follow an S-curve. At first, improvement and innovation seems slow as the fundamental concepts are worked out. Then there’s a period of very rapid change, innovation and feature expansion. And then, as the market matures and the 'white space' is filled in, perceptible improvement tends to slow down.”

So we’ve clearly reached “peak” innovation for smartphones — which begs the question, “What’s next?”

Get Ready for Augmented Reality

Newsflash: We don’t need to guess.

If we simply follow the words and actions of the world’s top technology companies and investors, there’s no mistaking it. They’re all betting big that augmented reality (AR) will be the next “big thing.”

In fact, as a columnist for Forbes recently proclaimed, “Every major tech company is now working on smart glasses.”

He’s not kidding, either. Consider:

Add it up and it’s a foregone conclusion based on the actions of the big tech companies that AR devices are on a trajectory to be as indispensable to us as smartphones. And that means it makes eminent sense that we should be betting big on AR, too.

So how do we go about it?

Unfortunately, an ETF focused on augmented reality doesn’t exist. Not yet at least.

Not long ago, an indirect option existed: the Defiance Next Gen Video Gaming ETF (VIDG).

As its name suggests, it focused on video games, one of the key areas where AR technology was expected to have an immediate impact. But it was forced to close at the end of last year due to a lack of investor interest.

In short, the timing was wrong. But with the AR mega-trend officially heating up now, the time is finally right.

With that in mind, in my column next week, I’m going to share several direct ways to invest in the burgeoning AR megatrend. So stay tuned!