With U.S. stocks firmly in correction territory, countless growth stocks have been knee-capped, particularly in the technology sector.

But I’m not about to bang the same bearish drum today. Heck no!

There’s enough negativity in the markets, which is why it’s all the more important to find the positive data points and pockets of opportunity.

And we just got a reminder about a massive one. So let’s get to it…

Can’t Nobody Hold Chips Down

A recent investment commentary from institutional powerhouse Blackrock declared that “Tech is the fabric upon which today’s economy is built.”

You don’t say? Oh, actually, I have been saying that for months.

Specifically that we’re living in the Era of Tech-Biquity, whereby tech infiltrates more and more of our personal and professional lives. And eventually, it becomes a seamless component in, well, everything.

The key recognition, of course, is that semiconductors function as the oxygen for this technology takeover. And therefore, chips promise to be a forever growth trend for all intents and purposes.

Now, some of you might consider labeling a sector a forever growth trend a bit hyperbolic and ignore it. And that’s fine. Time will bear it out.

In the here and now, though, there’s no denying that semiconductors represent one of, if not the strongest growth trends in the market today.

After surging 36% last year, the semiconductor industry is set to spend 24% this year on building out new manufacturing.

In dollar terms, we’re talking about a record high of $190.4 billion in cold hard cash being deployed to keep up with all the growth.

I’m sorry. But no self-respecting executive decides to plunk down tens of billions of dollars to build out capacity unless 1) the demand absolutely exists and 2) they expect to generate multiples upon multiples higher in sales off the investment.

To be sure, this isn’t some anomaly either and simply a response to the dramatic chip shortage. Truth is, we’re living in the most explosive growth period in history for semiconductors.

Make no mistake, the growth is widespread, too.

Case in point: Look at the list below showing the number of chip makers spending at least 40% more to build out capacity. It’s long! 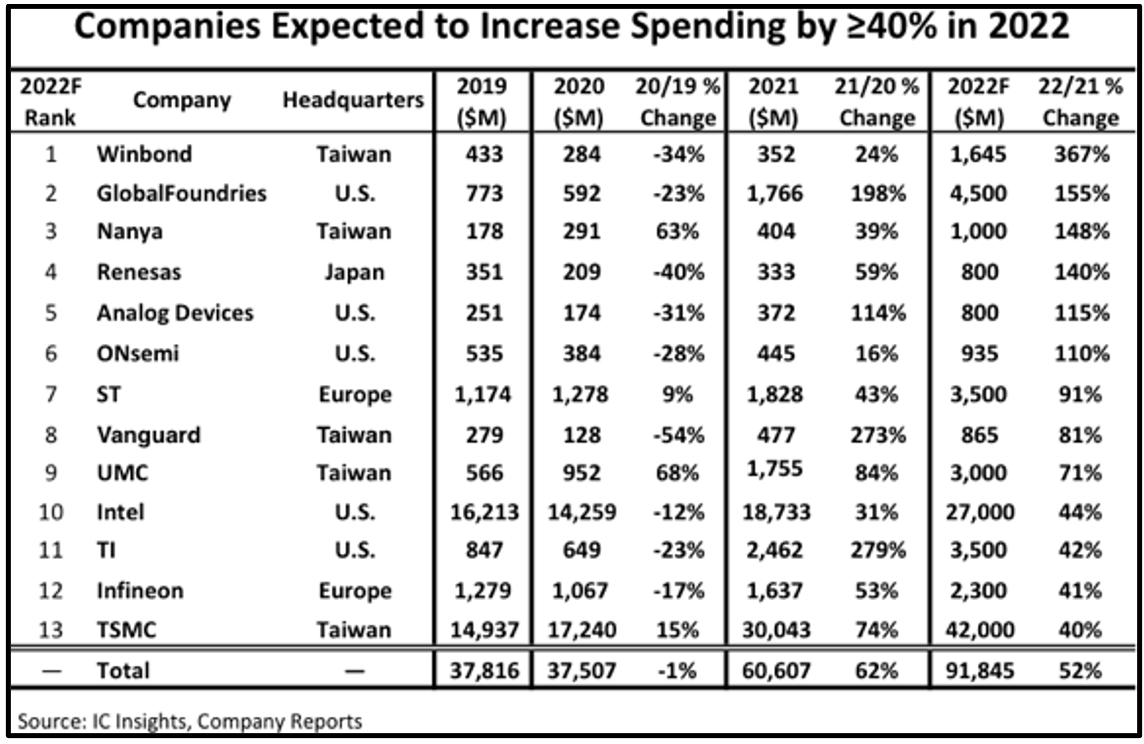 It includes the likes of Taiwan Semiconductor Manufacturing Company Limited (TSM) spending $42 billion alone in 2022, which represents an increase of 40% over last year. Meanwhile, other “smaller” players plan to increase spending by as much as 367%.

Or more simply, many semiconductor companies plan to go from spending hundreds of millions of dollars last year to billions this year.

So what’s the smartest (and safest) way to play this trend? It’s simple, really…

More factories making all the chips the world requires means way more equipment to make those chips is required, too.

So forget trying to predict which segment and end-use of chips is going to grow the most and then investing in pure-plays in those areas.

Instead, take a pick-and-shovel approach and buy the companies at the front-end of the value chain that make the equipment to make all types of chips...

And its sales and profits are booming, up 22% and 38%, respectively, in the most recent quarter. No surprise, shares have more than doubled since the start of the pandemic.

If you don’t want to take on any single company risk, at the very least, make sure you add some exposure to this forever growth trend stat!

Even if it means hitting the “easy button” and simply buying a semiconductor ETF, like the iShares PHLX Semiconductor ETF (SOXX). Your portfolio will thank you later.