NFLX: STILL the Riskiest FAANG Stock of All

I’ve been warning for well over a year now that online streaming giant Netflix, Inc. (NFLX) is the riskiest FAANG stock of all.

Not only was I right, it keeps getting riskier.

Case in point: The company reported results after the bell yesterday, shocking every analyst but this one that subscriber growth didn’t merely slow down, it went into reverse.

Shares are off 33% on the disappointment. And they’re down over 60% year-to-date.

The thing is, that means our profits are starting to stack up — and I believe there’s plenty more to come.

When Growth Slows, Look Out Below

I joined Fox Business again this morning to share an updated take on Netflix’s quarterly results. (You can watch the replay by clicking on the image below.) 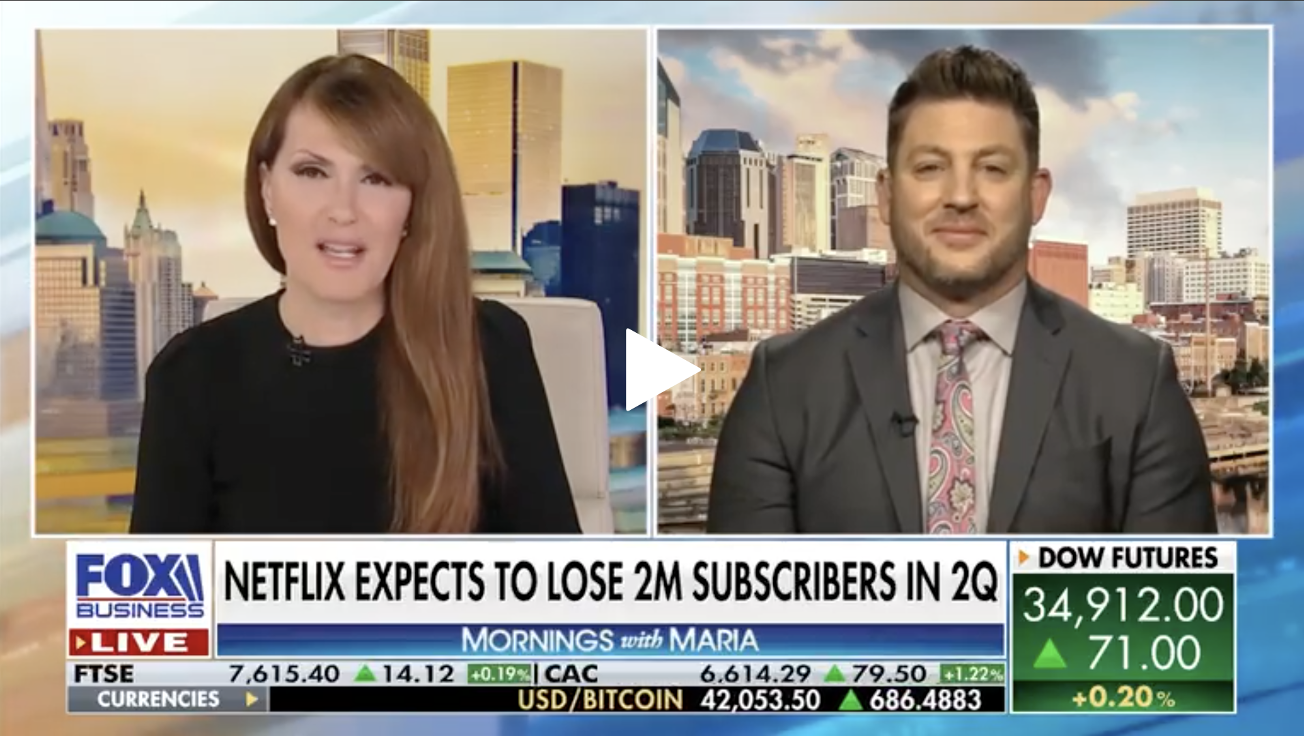 You’ll recall, after last quarter’s disappointment, management tried to convince us that the growth slowdown was only transitory.

More specifically, CFO Spencer Neumann said it was tough to pinpoint why net new subscribers were plunging. But he pinned the blame on a “COVID overhang” after two years, as well as some “marginal impact from competition.”

Silly Rabbit! Just like the Fed learned the hard way about “transitory” inflation, Netflix is learning that its subscriber slowdown is anything but transitory.

I’m sorry, but when you take away subscriber growth, the rest of Netflix’s fundamentals are anything but compelling.

They include soaring content costs (the company spent $17 billion on original content in 2021, up from $7 billion in 2016), increased competition, a significant $18 billion debt burden in a rising interest rate environment, and the most damning issue of all: an overextended consumer.

Concerning the latter, the latest Nielsen data reveals 35% of consumers now subscribe to four or more streaming services. That’s up from only 11% in 2019, and way too many services for even the most committed binge watchers.

Even if gas and food prices weren’t rising rapidly, consumers would be cutting back on their streaming budgets. The current inflationary environment just means it’s going to happen faster and with more severity. Mark my words.

In other words, look out below. Netflix is going to keep bleeding subscribers, which will only compound its problems.

If the company manages to show any growth in the coming quarters, don’t fall for the headfake. It’s not real.

By that I mean, the company has identified that 100 million households are not paying for service, but are instead sharing someone else’s account info. Putting a stop to this behavior, which Netflix already started doing in test markets last month, means any growth is simply the company monetizing its existing audience, not attracting new customers.

Add it all up and the stock’s already back to pre-pandemic levels. But as we learned with other Covid darlings-turned-duds like Peloton Interactive, Inc. (PTON) and Zoom Video Communications, Inc. (ZM), there’s always more room to fall.

Longtime readers are already profiting from this downturn, as we purchased some cheap, long-dated put options in January. I’m convinced that our current 144% gain is only the beginning. Don’t miss out!