Rise of the Robots Revisited

At the end of last year, I told you we were well on our way to a robotic future. Luddites be damned!

Fast-forward a few months… and the latest data not only proves I was right, but it also demonstrates that this trend is rapidly accelerating, entering record territory, and still nowhere close to peaking.

Here’s the latest scoop — and of course, the smartest and safest way to keep profiting from it.

Up, Up and Automate Away

According to new industry statistics released by the Association for Advancing Automation (A3), the number of robots sold in North America rose 28% in 2021.

Sales in the fourth quarter hit a fresh record too, demonstrating that momentum is building, not waning.

"More industries recognized that robotics could help reverse productivity declines and fill repetitive jobs human workers don't want," said Jeff Burnstein, president of A3. "It is no longer a choice whether to deploy robots and automation. It's now an absolute imperative."

That’s the understatement of the century, Mr. Burnstein. Why? Two reasons…

First, the economics overwhelmingly add up.

Second, the demographics demand we use more robots. Particularly in the United States.

As I’ve shared before, we frankly have no choice but to ramp up robotic deployment to stay competitive.

More specifically, the U.S. severely lags the rest of the world in terms of automation. 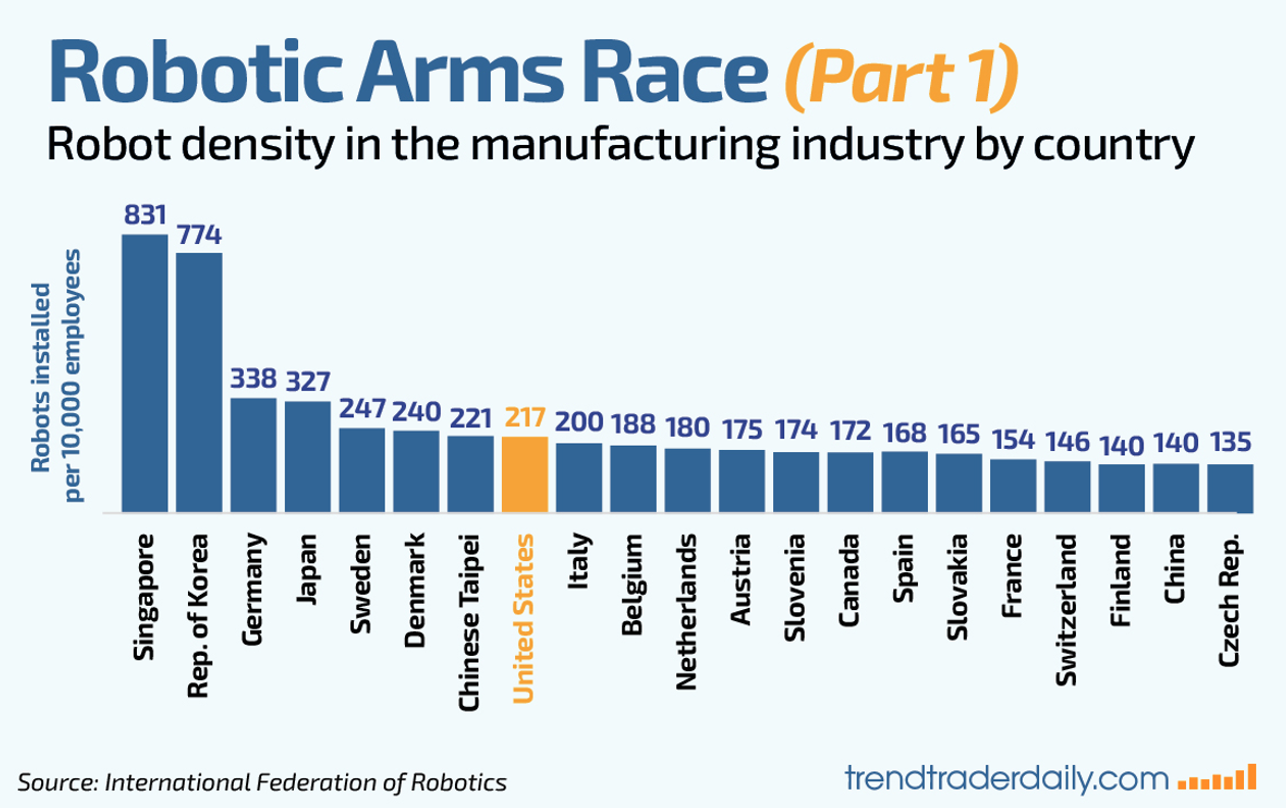 And that’s creating a major choke point in the logistics and e-commerce markets, where robots are significantly more efficient than humans and readily available.

Truth is, humans are going to be less and less available as time passes on.

Why? Because since the onset of the Great Recession in December 2007, fertility rates in the United States have fallen by nearly 20%.

By one expert’s projection, “Had pre-recession fertility rates remained steady through 2018, there would have been 800,000 more births.”

Simply put, the population of available workers is on the decline, while the cost for robots continues to decline, which means making and deploying more robots is all the more inevitable.

How many more? According to McKinsey, annual industrial robot installations are estimated to increase to 600,000 this year, after already growing to 450,000 since 2015.

Even then, we’re just scratching the surface, as less than 1% of manufacturing workers around the world would be robots.

Add it all up, and the Trend Trader Pro “Trade of the Week” couldn’t get any more compelling. Don’t miss out!