The Most Important Chart of the Week

A little gratitude goes a long way. And today, I’m gushing with thankfulness that the biotech sector appeared to bottom out yesterday.

As you know, I’ve been pounding the table to buy biotech stocks for the better part of two years.

And the results have been nothing short of amazing. Medium- and longer-term results, that is.

More recently, though, it’s no secret that smaller-cap biotech companies have been taken out to the woodshed. And for no good fundamental reason.

That’s the problem. I’m all for having to “Buck up, Buttercup” and endure price volatility in this sector. It comes with the territory. But when it’s unjustified? It makes enduring it all the more difficult.

I guess old-timer Benjamin Graham was onto something when he observed, “In the short run, the market is a voting machine but in the long run, it is a weighing machine.”

With that in mind, here’s why yesterday’s intra-day trading action has me breathing a sigh of relief and expressing thanks that the worst of the biotech sell-off is over.

Then, it’s time to share a savvy way to invest in the sector for potentially lightning-fast gains if this truly is the bottom.

Bottom Out, Then Up?!

Over a month ago, I wrote about the confounding divergence in the biotech sector.

To refresh your memory…

All manner of biotech companies had been reeling since their February highs. But the smallest kept getting hit the hardest.

More specifically, through mid-October, the iShares Biotechnology ETF (IBB) was up only about 4% on the year. Keep in mind, it was up nearly 15% earlier in 2021.

Meanwhile, the smaller-cap focused SPDR S&P Biotech ETF (XBI) was down 11% through mid-October. That’s an even scarier fall from favor, as it was up nearly 25% to start out the year.

Like I said, there was no fundamental reason for the divergence:

And IPO and venture funding for biotechs remained as bullish as ever.

And yet the divergence only widened.

Since mid-October, IBB stumbled. It’s now down about 5% on the year. However, XBI got kicked in the groin and essentially doubled over — it’s doubled its losses, dropping 22% on the year.

Sadly, yesterday’s early trading action looked like nothing but more selling was in store.

XBI dropped nearly 2.5% shortly after the open to hit a fresh 52-week low.

Full disclosure: I was not very thankful at that moment. But then it all changed.

As you can see in the chart, buyers stepped in to stop the bleeding… and XBI actually finished a smidge in the green. 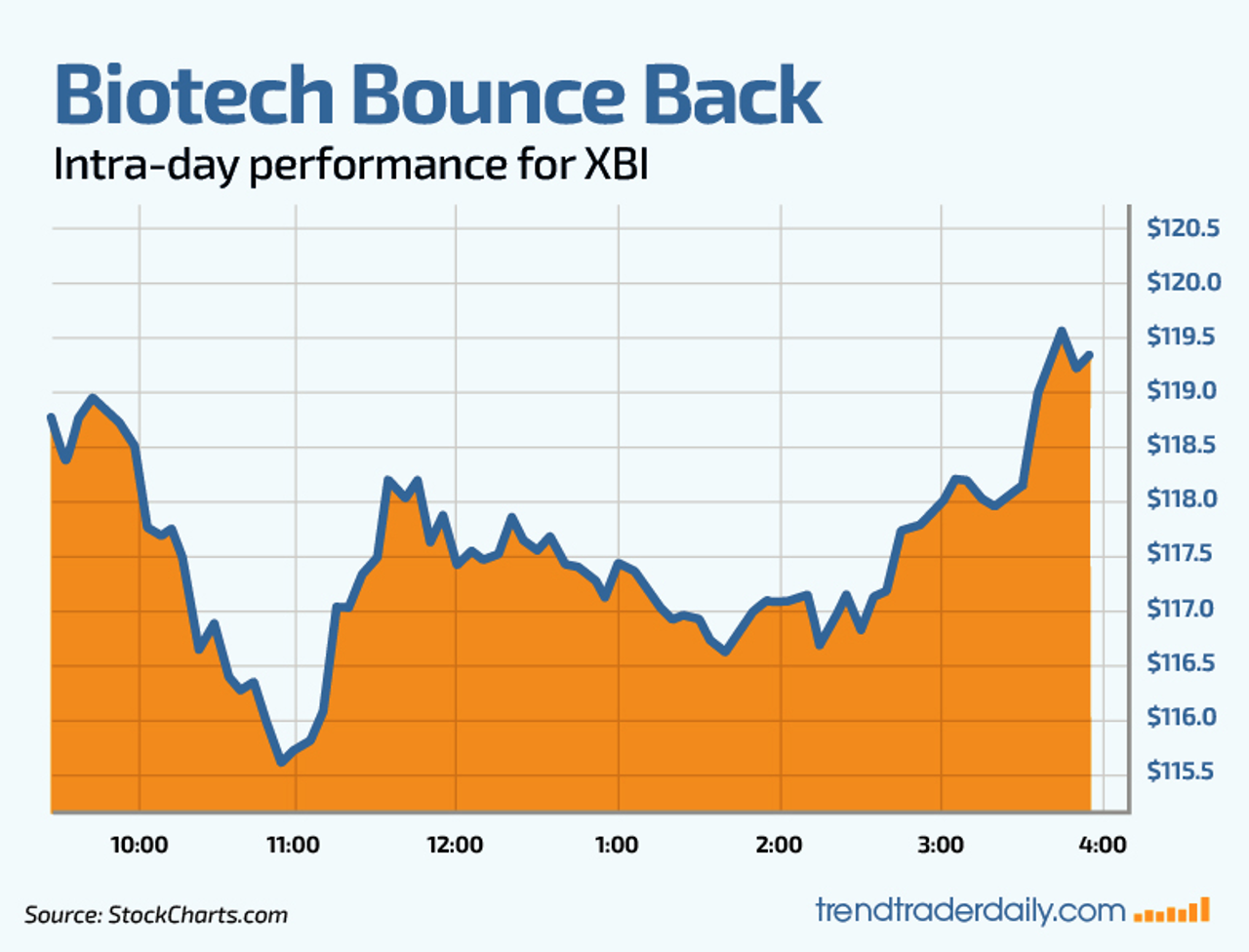 That’s a huge turnaround in a single session. And I’m convinced it signals the bottom finally got put in.

After all, it’s been years since the biotech sector hit such extreme levels. And just like leverage can cut both ways, biotech volatility can be a curse and a blessing.

By that I mean, the bounce-back rallies (particularly for companies reporting strong data) occur rapidly and violently. So while it might be painful to endure the drawdowns right now, they’ll be a distant memory when investors pile back into the most compelling biotechs.

That’s how it always happens in this wealth-changing sector. Even big pharma companies know it, which is why they’ve been ramping up their dealmaking in recent months to take advantage of the unbelievable bargains before they disappear.

The trick, of course, is making sure you still own biotech stocks when this reversal and rapid rally happens.

With that in mind, I’m sharing not one but two picks today. The first is a specific small biotech with the potential to massively revalue in the days and weeks to come. And the second is a more conservative but equally compelling way to play the biotech bounceback.