As investors, we don’t get to ignore reality. Not if we want to be consistently profitable, which (duh!) we all do.

Instead, to keep our portfolios positioned to profit through all market conditions, we have to adjust our strategies to new market realities.

Why bring this up?

Because for weeks now, I’ve been banging the drum about runaway inflation… the real risks of a recession (gasp)... and then, of course, an eventual rebound (hallelujah!).

But we can’t just sit idle while we wait for the inevitable and historically strong rebound to materialize. Rather, we need to be proactive, which is why I’m making good on my earlier promise to share a particularly timely trade idea today.

Let’s first cover the set-up. Then, we’ll get to the specifics of this low-risk, potentially high-reward trade…

The Impact of Inflation Explosion

We all know it from our daily lives: inflation is running red hot, driving up costs on essential items like food and energy, among other things.

Case in point: In the last week alone, consumer sentiment and retail sales fell out of bed.

More specifically, consumer sentiment plunged 14% to hit a record low. And retail sales not only missed expectations for May, but fell month-over-month for the first time in almost six months.

The retail sales figures would have been worse, if it weren’t for strong increases.

But obviously, those increases are a function of rising prices due to inflation, not to rising demand.

Discretionary demand-driven categories of retail sales (like automobiles, and electronics and appliances) fell month-over-month and year-over-year.

As Bespoke Investment Group noted, “[The report] illustrates the inflationary pressures of higher gas and food prices crowding out spending in other areas of the economy.”

Indeed! And these pressures aren’t going to let up, which means we should expect the downward sentiment and retail spending trends to persist.

Cheery news, I know. But it gets worse…

From Shortage to Glut

Against this backdrop of diminishing discretionary income and spending, we’re also witnessing an economic shift when it comes to inventories.

I’ve written about the most extreme of these transitions in the retail sector at major players like Target Corporation (TGT) and Walmart, Inc. (WMT). 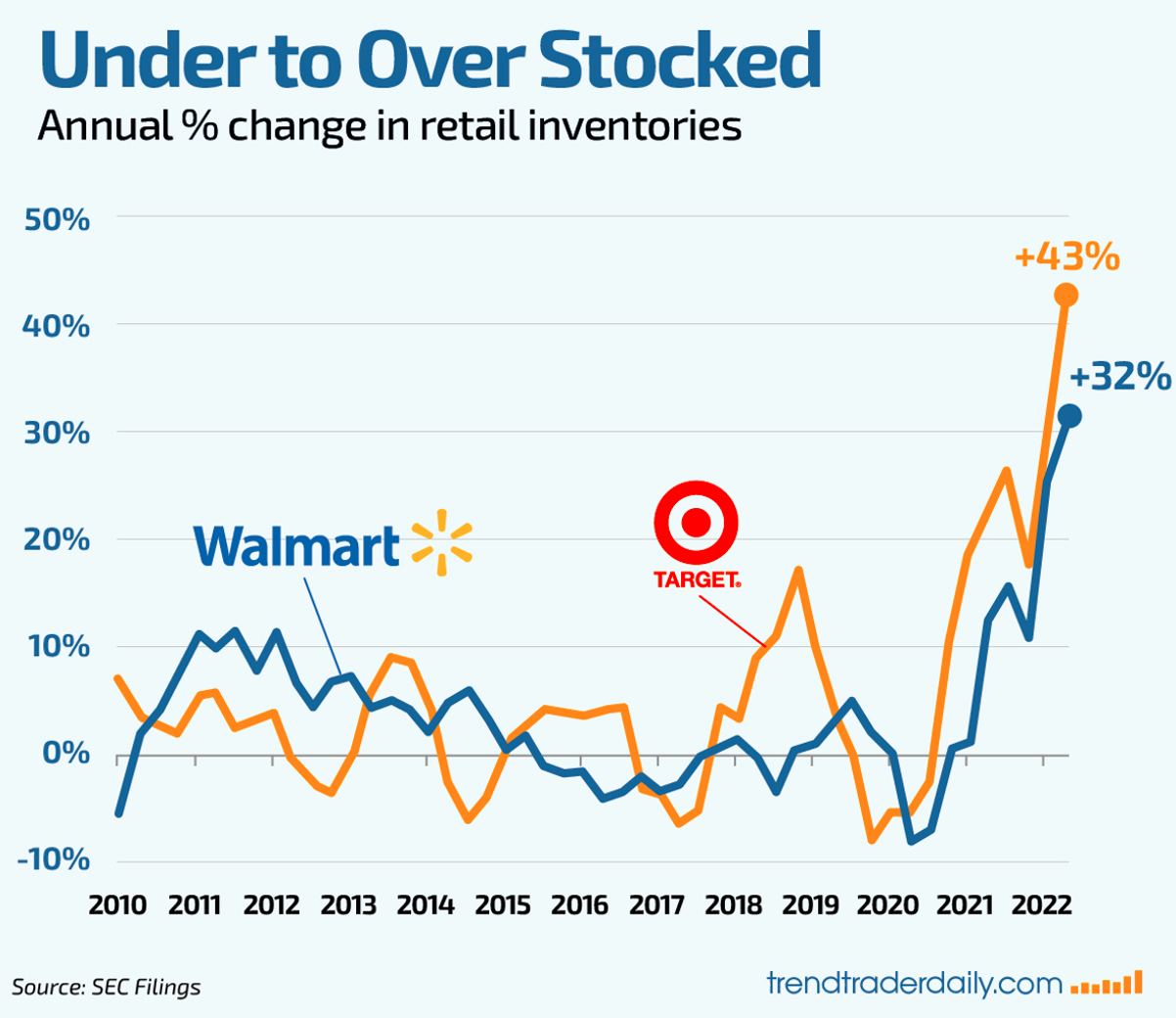 Here’s the problem: these supply gluts will require price cuts to get back to normalized inventory levels, which directly cuts into retail margins. That’s assuming demand stays strong. But demand is declining, too. So retailers are going to have to keep combatting falling demand with even lower prices, which reduces profits even more.

In other words, if stock prices ultimately follow earnings, which they do, shares of major retailers promise to keep getting taken out to the woodshed.

In an environment when consumer sentiment is plummeting, inflation is soaring, and household finances continue to come under stress, the only retail beneficiaries are the bargain stores.

And therein lies the opportunity we’re going to exploit in this week’s Trend Trader Pro “Trade of the Week.”

By the way, from now until July 1st, you can lock-in a LIFETIME subscription to Trend Trader PRO at a significant discount. Click here to learn more and upgrade today »