This Is Your Captain Speaking…

You’re going to tire of me saying this, but it’s gospel truth…

Being a profitable trend trader means being willing to invest in a burgeoning trend before it’s obvious to the rest of Wall Street and Main Street.

I already proved this to you when I “double dared” you to ignore the clear change in the 3-month growth rate for semiconductor equipment sales.

If you followed my lead there, you’re already sitting on healthy double-digit profits.

Well, consider this a fresh opportunity to do the same thing again…

This time, in (gasp!) airline stocks.

As you’re about to see, the latest evidence indicates this sector is ready for takeoff.

Back to Roaming the Country

You’ll recall, I put airlines on your watch list nearly a month ago.

Why? Because the major reduction in capacity coupled with low fuel costs meant one thing:

As soon as air travel started to pick up again, airlines would be poised to profit again.

As I’ve shared before, for family reasons, I’ve been traveling almost weekly for the entire year. So I have firsthand anecdotal knowledge here.

And here’s the thing — after flying this past weekend, I’m convinced the rebound is upon us.

Not only were both my Southwest flights packed, but both airports were bustling, with all the food vendors up and running.

This is in contrast to a few months ago, when my flights were at just 40% to 50% capacity.

And it’s a different world entirely than during the early days of the pandemic, when I was routinely the only passenger on my flights, and the airports looked like an apocalyptic wasteland with no one around and no businesses open.

Based on what I witnessed yesterday at the airports, I decided to check the empirical data.

And guess what? It only increased my conviction that it’s time to start buying airlines.

There’s no better measure of airline travel, as far as I’m concerned. That’s why I shared it with you back in July, as an easy way to measure the health of the airline industry.

Here’s an updated version of the chart I originally showed you. The perceptive eye will notice a budding uptrend in daily traffic represented by the blue line. 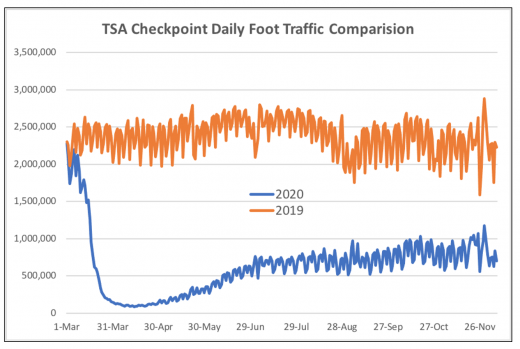 If I present the data another way, though, it becomes glaringly obvious.

For example, take a look at the chart below…

It shows the year-over-year change in daily TSA traffic.

As you can see, when all the lockdowns started in March and April, daily traffic collapsed by almost 100%.

That’s when I was the only person on my flights. 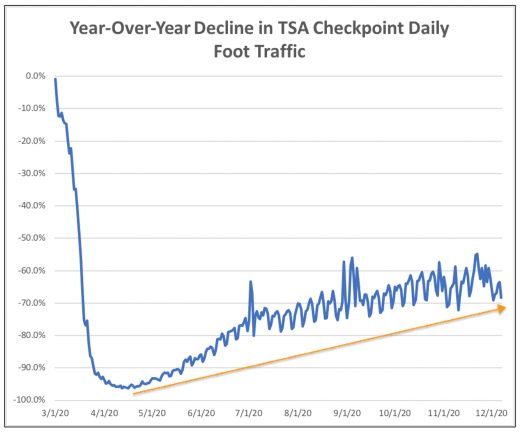 But since then, we’ve seen a steady and gradual trend higher.

I say “only” in quotes to make sure you understand that I recognize we’re nowhere near healthy travel levels yet.

I fully expect this trend to intensify in the coming months. And I’m not alone, here, either.

A recent report from Morgan Stanley reveals that some on Wall Street are waking up to the reality, too.

Whereas the consensus is for a rebound to pre-Covid 19 levels in 2024, Morgan Stanley analysts point to several factors they believe will lead to a return by late 2021 or early 2022.

Specifically, they cite, “pent-up demand, fewer competitors than in past global crises and a more stable fuel-price outlook.”

In other words, the same market fundamentals I pointed to, as well.

The Smartest Way to Profit

By no means do I think anyone should rush out to buy a single airline stock. There’s no guarantee which ones will rebound the quickest. Or even survive.

Instead, I recommend using an ETF to play this trend:

More specifically, this ETF is up 32% in the last month. Yet it’s still trading nearly 30% below its pre-Covid 19 highs.