When It Hurts to Be Right

This morning, the Bureau of Economic Analysis reported that the U.S. economy shrank for the second consecutive quarter, which is the technical definition of a recession.

Why do I sound so chipper about downbeat news? Because I’ve been predicting this day would come for months now.

Specifically, in early June, I wrote:

“Shocker: I believe we could actually be in the middle of a recession right now. All it takes is two consecutive quarters of contraction.

And guess what? In Q1, the annual U.S. GDP growth rate unexpectedly shrank 1.5% after posting a 6.9% increase in the previous quarter.

That’s a massive reversal. So don’t be surprised if we see the downtrend continue when Q2 GDP numbers are released.”

Of course, at the time, no one wanted to believe me or listen to the information I shared to help us prepare for what would happen next.

So now that there’s no more technical room for argument, let’s revisit some of the key recession data points and takeaways.

(Hint: It’ll be beneficial to your bottom line.)

While the talking heads, including Treasury Secretary Janet Yellen, will still argue whether the economy is in a recession until the National Bureau of Economic Research declares it official months from now, the data doesn’t lie.

We’re in a recession. And believe it or not, that’s not bad news for stocks — it’s good news.

Why? Because history defies conventional wisdom. As you can see below, stocks sell off the most before a recession hits, not during or after a recession. 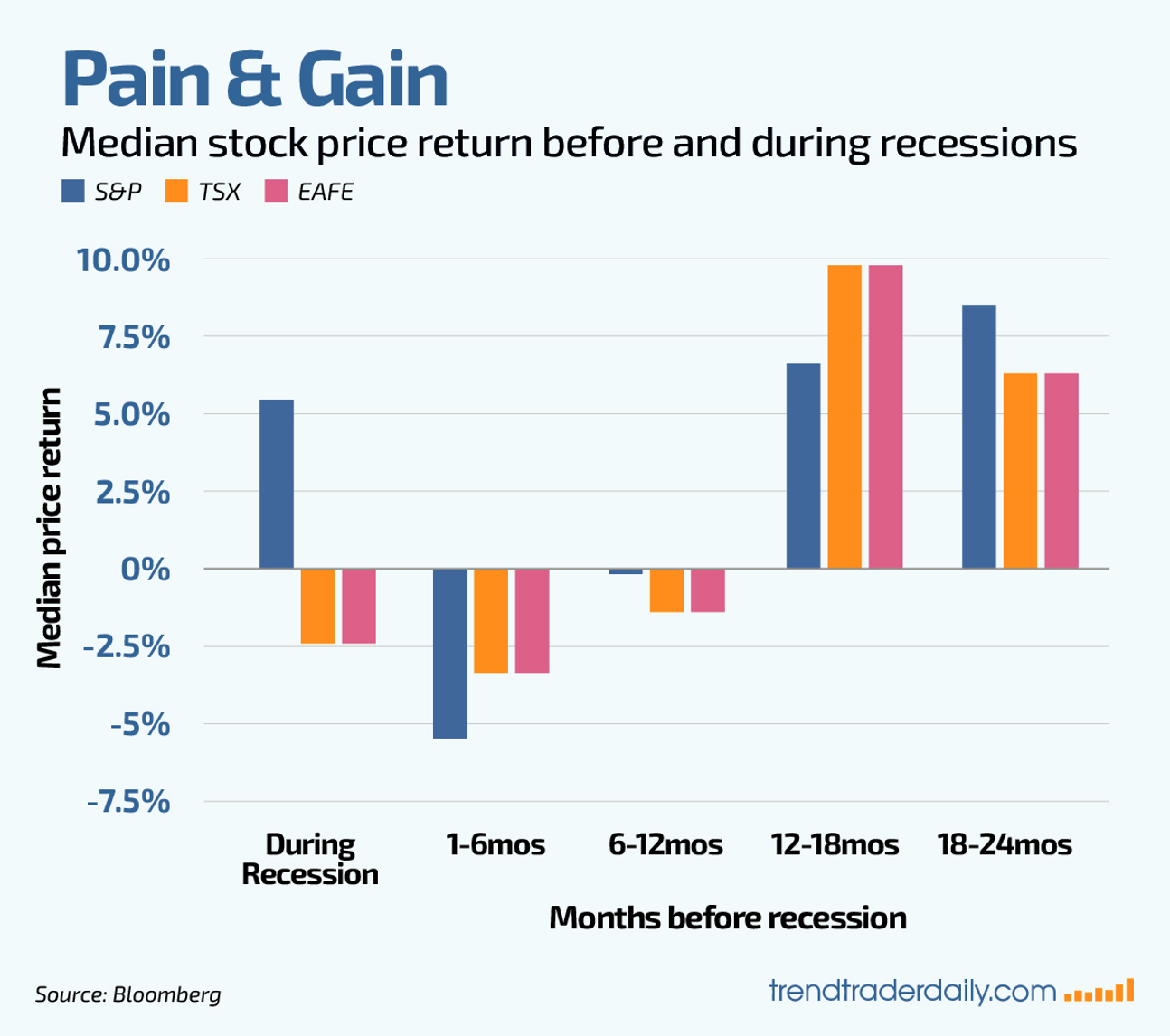 As the chart below further shows, gains during recessions aren’t uncommon.

In fact, the S&P 500 Index gained an average of 3.68% during all recessions, and produced positive returns in seven out of 13 recessions, or 54% of the time.

What’s more, when recession rallies occur, they can be substantial, with stocks rising by double-digits 71% of the time (that’s five out of seven times).

Like I said, don’t give into all the fearmongering over inflation and recessions.

Otherwise, you’ll likely be too scared to take advantage of the opportunities.

And now we’ve reached the phase of figuring out how long the recession will last, not if the economy will enter one.

For perspective, the average recession lasts 10 months, excluding the Great Depression. And the shortest one lasted two months, which occurred at the start of the pandemic.

Here’s the key: once a recession starts, the next thing to follow is a stock market rebound.

While many investors believe we need to get to the end of a recession before stock prices rebound, they’re dead wrong.

As the data I shared today proves, stock markets remain forward-looking and historically biased towards optimism.

So when it comes to our portfolios, even after months of selling and losses, we should be similarly optimistic about what lies ahead.