Why It’s Time to "Quantum-Proof" Your Portfolio

“I’m from the government, and I’m here to help.”

According to President Ronald Reagan, those are the nine most terrifying words in the English language.

And he’s not wrong! Except in this case:

Whenever the high-tech research arm of the U.S. Department of Defense (DARPA) shows up on the investment scene, it truly is here to help.

You see, its interest not only helps tip us off to the next big investment trend, but its investment dollars can help accelerate that trend.

Case in point: Last September, I alerted you to DARPA’s $2 billion bet on Artificial Intelligence. And as a result, I told you to scoop up leading AI-chip maker NVIDIA Corporation (NVDA).

But as impressive as those gains are, I'm convinced they’ll be peanuts compared to the profits created by the next tech trend DARPA is going all-in on...

Welcome to the Quantum Computing Age

In April, DARPA announced a new program to facilitate the accurate measurement of progress toward building quantum computers.

For those unaware, quantum computing is the bleeding edge of tech development. It involves using quantum physics, which explains the behavior of energy and materials on the atomic and subatomic levels.

The reason that quantum computing holds unfathomable potential is simple. Instead of being limited by conventional computing that can only encode information in bits that take the value of 1 or 0, quantum computing uses quantum bits or qubits that can exist in more than one state  — i.e., a 1 and a 0 at the same time.

And when you link qubits together, it increases the computational powers of quantum computers exponentially, whereas linking together bits of traditional computing code only increases computing power linearly.

That explains why quantum computing represents the highest order of supercomputers.

To give you a quick real-world example — in 2019, Google proved that a quantum computer could solve a problem in mere minutes that would take a classic computer 10,000 years. (That’s not a typo.)

In fairness, DAPRA’s been investing in quantum technologies for decades to bolster military capabilities in areas like ultra-secure communications, as well as navigation, positioning, and timing in environments where GPS isn’t possible.

In other words, DARPA’s been laying the foundation for the quantum computing age for quite some time. But now it’s finally upon us.

And for proof, all you need to do is look at the investment dollars flooding into the space...

Per the Boston Consulting Group’s latest tally, “Equity investments in quantum computing nearly tripled in 2020, the busiest year on record, and are set to rise even further in 2021. 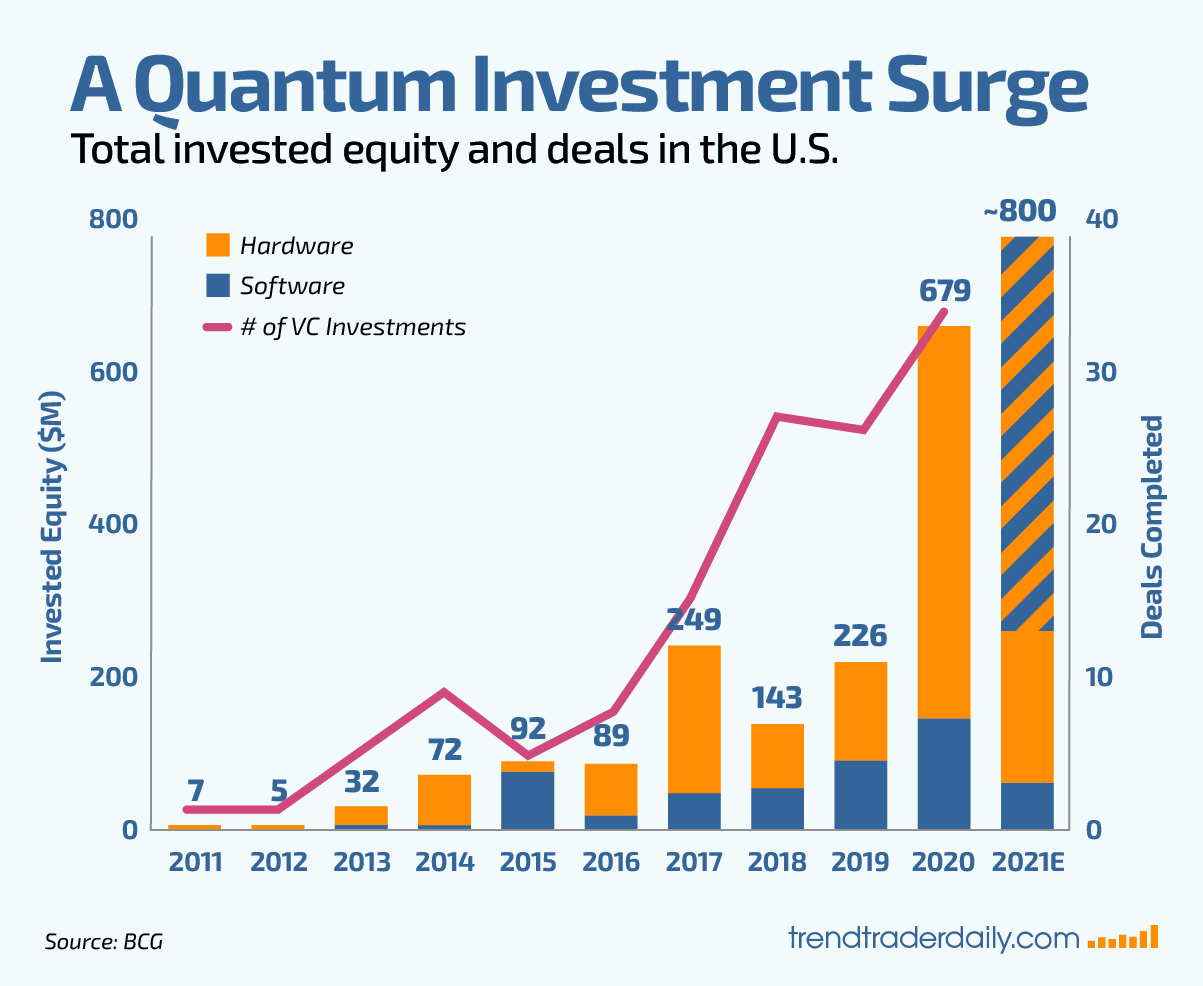 Here are three key takeaways to realize from this data:

Most important of all is the realization that investment in quantum computing is surging as the world latches onto more practical applications.

For right now, what matters is that you heed the clear “buy” signal from — yes — the U.S. government!