Year in Review in 10 Charts: The Robotics Revolution

In yesterday’s column, I laid out the undeniably bullish case for semiconductor stocks…

And included a rundown on why record chip shortages won’t hurt demand one bit.

Today, it’s time to turn our attention to a different but related opportunity — an opportunity that’s emerging as a result of the chip shortage.

And in the process, I’m going to share a fool-proof way to time your emerging technology investments perfectly. So let’s get to it..

When it comes to investing in emerging technology trends, timing is everything.

Too early and there’s a lot of waiting (and losses) involved. Too late and there’s not enough upside remaining.

So how do we time our tech investments just right?

Well, I shared one foolproof strategy with you before: use Gartner’s Hype Cycle.

When they meaningfully ramp up their investing around a specific technology, we know development and deployment for that tech is about to accelerate rapidly.

And guess what? Right now, venture capitalists are going “all-in” on robotics and automation.

In fact, in the last quarter alone, venture capital investments into artificial intelligence companies, the lifeblood of the robotics trend, hit a record for the fourth consecutive quarter at nearly $18 billion. 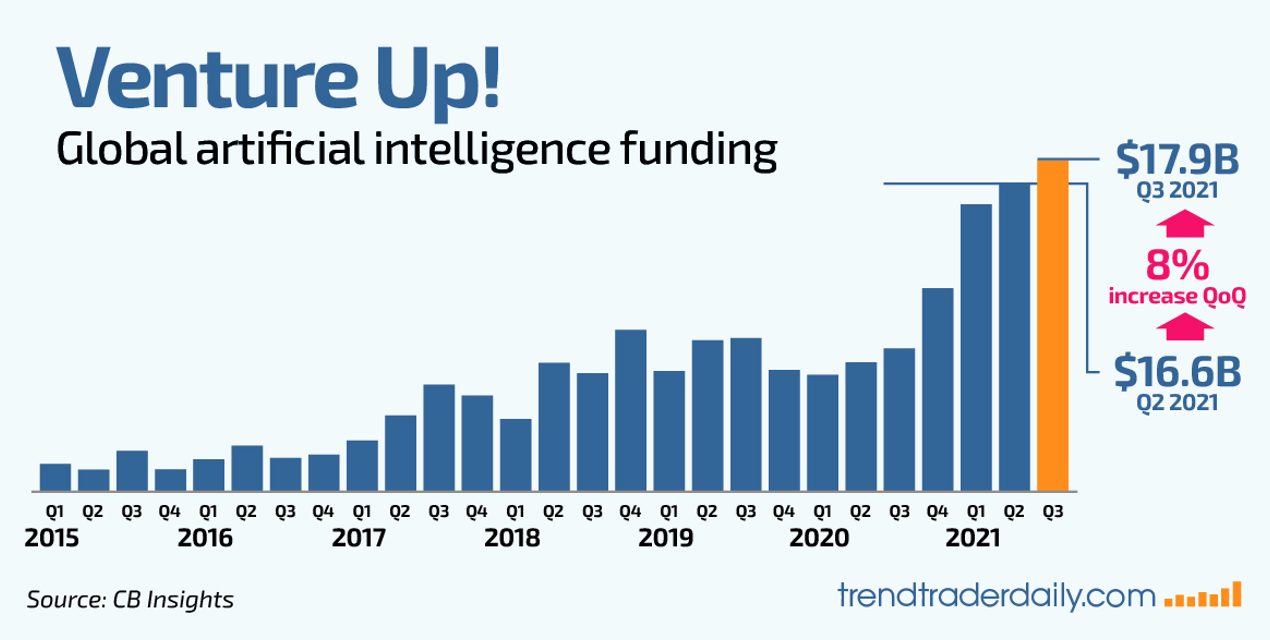 That’s a serious flood of capital and you’d think it would turn some heads. But most investors remain oblivious to it, which means it’s not too late for us to get positioned.

To the contrary, I’d argue our timing is perfect, as we’re entering the knee of the growth curve.

But forget about the money being invested into new companies — over the next three years, actual spending on robotics is set to nearly double worldwide, from $128.7 billion to $241.1 billion.

So what’s driving this boom?

Convergence (and Covid) at Work

The reason automation is on the rise and gaining traction more quickly than most people realize can be summed up in two words: convergence and covid.

First, improvements on multiple technological fronts are converging to make robots dramatically more powerful and affordable than ever.

For example, thanks to advances in 3-D printing, prototypes can be made more quickly and cheaply, which accelerates development time.

Plus, the smartphone boom means sensors and other components used in robots are widely available.

And thanks to advances in materials sciences, robots can be used in more demanding applications.

Simply put, robots are cheaper, smaller, more efficient, and capable of higher performance than ever.

At the same time, the Covid-19 pandemic exposed a major weakness in our supply chains.

As UBS analyst Adam Scheiner sums it up (emphasis mine):

“The [chip] crisis has also highlighted how companies cannot afford to have all their supply coming from one country that could shut down their entire manufacturing footprint. Localizing efforts could cause a boost in new factory construction, which could benefit companies exposed to automation and robotics technologies.”

In other words, Covid-19 sparked a massive upgrade cycle to alleviate future supply-chain issues. And that upgrade cycle is leading to dramatically more robots being deployed.

Rise of the Machines

Covid or not, we frankly have no choice but to ramp up robotic deployment.

I say that because, as it stands now, the U.S. severely lags the rest of the world in terms of automation. Take a look: 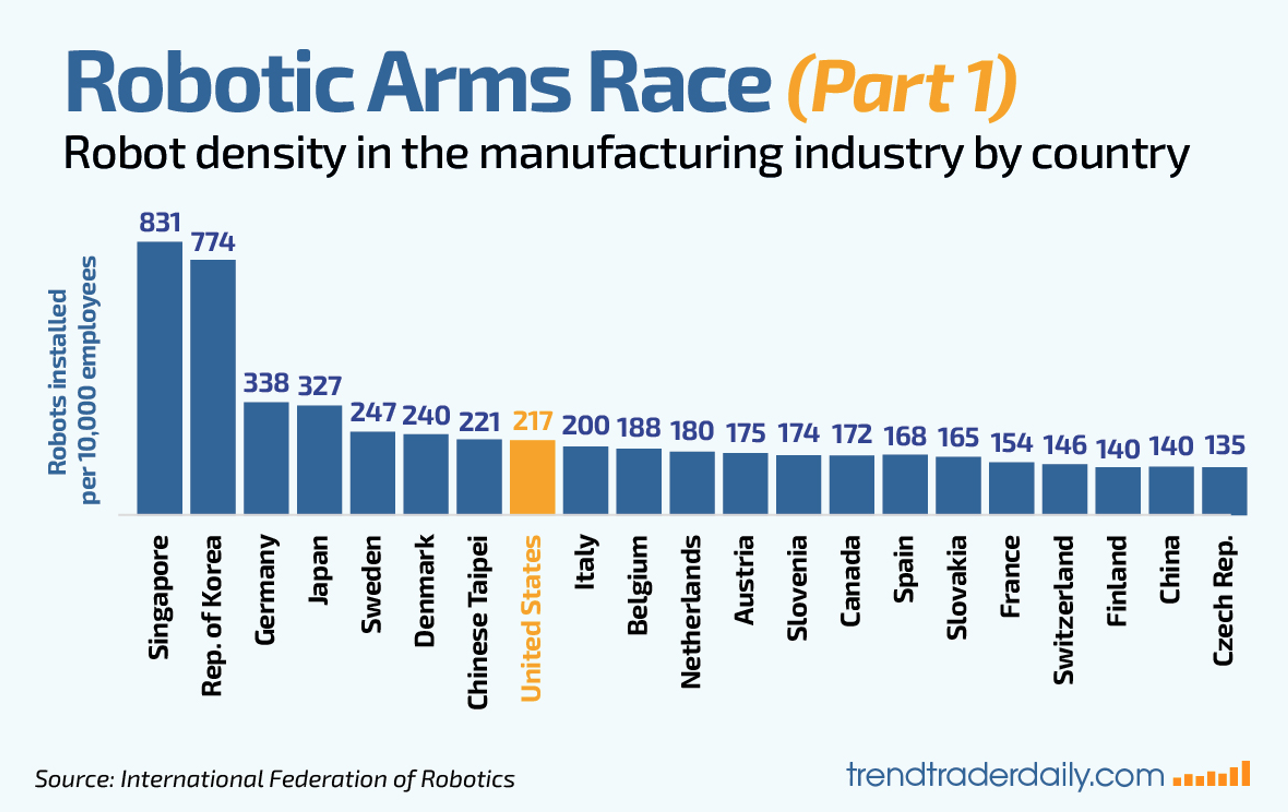 And that’s creating a major choke point in the logistics and e-commerce markets, where robots are significantly more efficient than humans and readily available.

More specifically, not only can robotic pickers handle in excess of 100 items per hour compared to about 60 items for humans, but there’s no difficulty in “finding” robotic workers to perform this dull and exhausting work.

Robots are plentiful, whereas humans interested in such work simply are not.

Or as Ken Goldberg, co-founder and chief scientist of Ambi Robotics summed it up:

“Emerging advances in AI and automation are bringing together the power of data, computing, and algorithms to allow robots to learn from examples to support the labor force. This reality makes logistics a sweet spot for robotics. E-commerce demand will continue to grow, and robots will be there to fill the gaps when there are not enough human workers to do the job.”

In terms of quantifying the upgrade cycle, industry experts expect the logistics and warehouse automation market alone to reach $70 billion this year, and grow by another 50% to $105 billion by 2025.

In terms of the actual number of new robots, we’re talking about millions more in the years to come.

Even then we’re just scratching the surface, as less than 1% of manufacturing workers around the world would be robots. 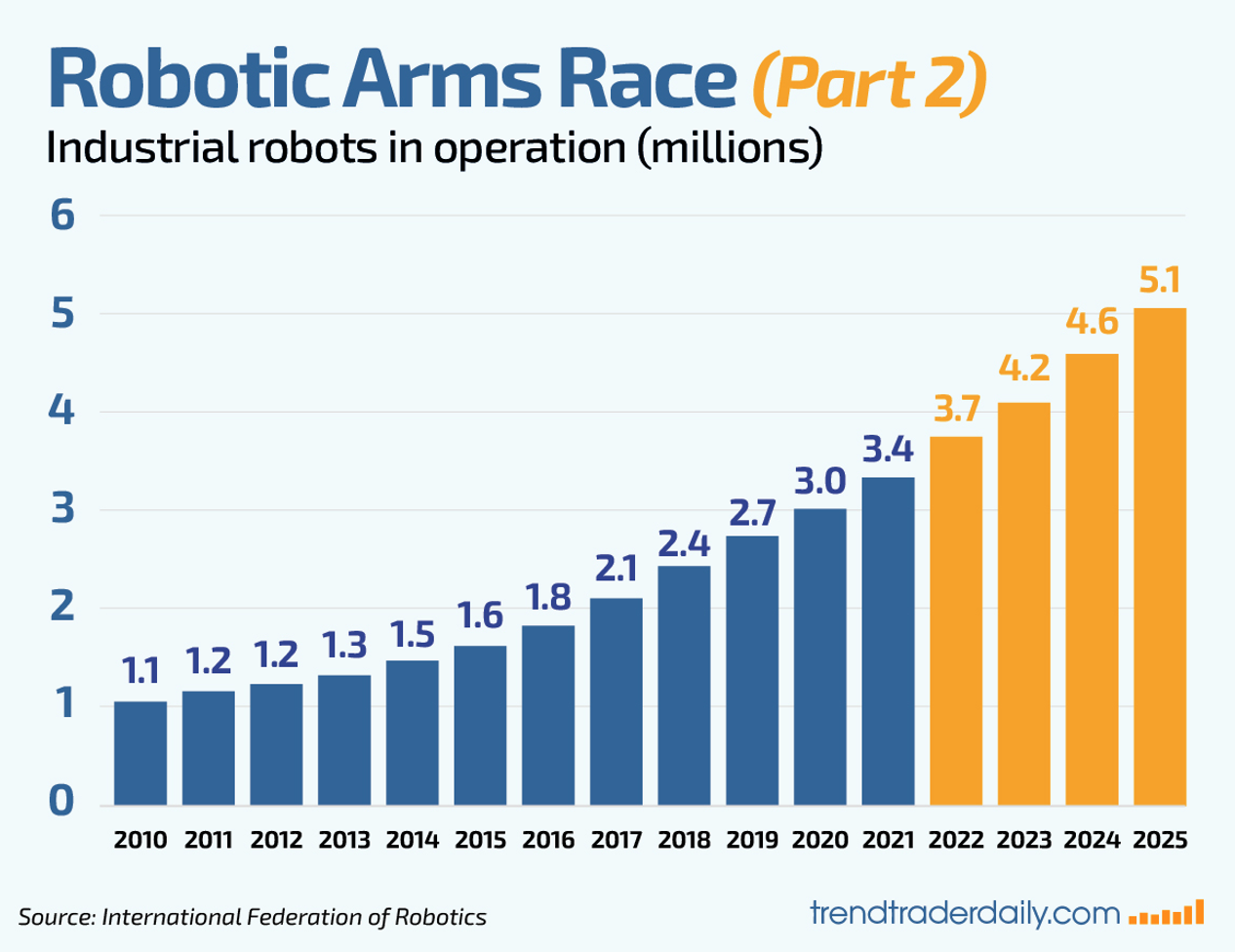 Simply put, 2022 promises to bring with it a massive acceleration in investment, applications, and adoption of robotics and automation technologies.

All we have to do is figure out the best ways to capitalize on this trend.

The smartest and most diversified approach remains the Robo Global Robotics and Automation Index ETF (ROBO).

Each of the 84 companies in the portfolio derives a portion of its revenue from robotics-related or automation-related products and services.

What makes ROBO particularly unique is that it’s “opportunity weighted.”

That means, instead of investing equally in all companies — or basing it on market-cap like many indexes, which dilutes exposure to smaller and potentially more explosive winners — it invests more in companies with high levels of robotics revenue, research and development, and market and technology leadership.